This page details the history of the Letter from Bambarre. The page begins by outlining the circumstances that led Livingstone to compose the letter, then describes the subsequent history of the letter, particularly after its purchase at a Sotheby's auction in 1966 by Peter Beard.

Livingstone was at a personal and profession nadir when he wrote his letter to Waller. The dramatic crossing of the African continent from 1852 to 1856 and the resulting narrative, Missionary Travels (1857), established Livingstone's reputation as an explorer, abolitionist, and imperial visionary. Unfortunately, his subsequent journey to Africa (1858-64) revealed that many of his plans for African colonization and development had been poorly conceived. 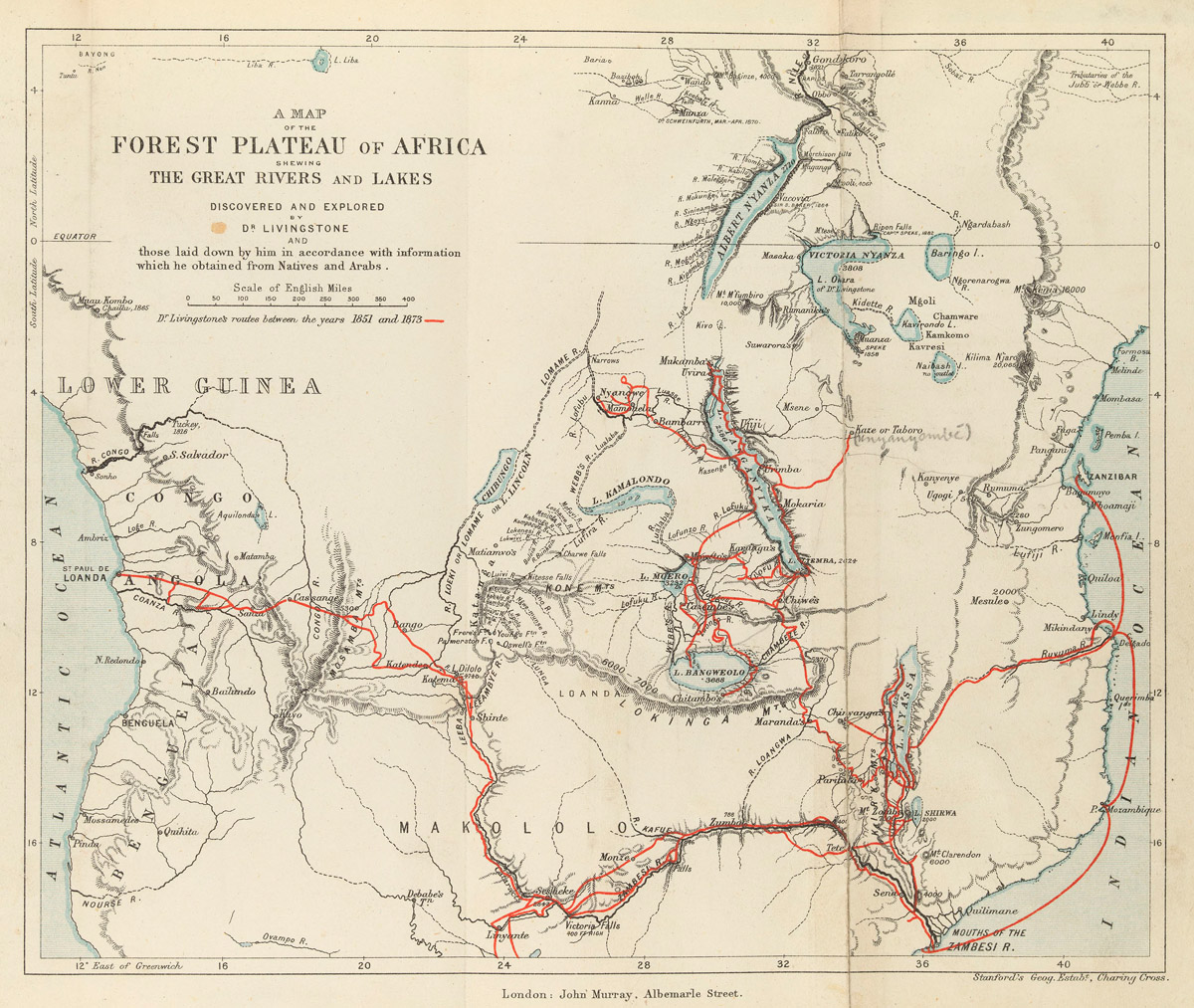 The last journey, which began in March 1866, offered a chance to alter the trajectory of Livingstone’s career and restore his reputation. He sought to examine the watershed of central Africa, promote the introduction of commerce into the region, and, ultimately, locate the most southern source of the Nile, the grand geographical prize of the nineteenth century.

However, after three unsuccessful years exploring the lakes and rivers to the south of Lake Tanganyika, Livingstone realized that he would have to examine a river that ran to the west of the lake, the Lualaba, in order to determine the river’s connection – if any – to the Nile. In March 1869 Livingstone reached Ujiji, an Arab trading depot on the eastern shore of Lake Tanganyika. By the end of July 1869 he had crossed the lake and was heading west, intent on rapidly passing through the region of Manyema in order to strike the Lualaba "roughly three hundred miles west of Ujiji" (Jeal 1973:326). He planned to finish exploring the river in six months then return to Ujiji. 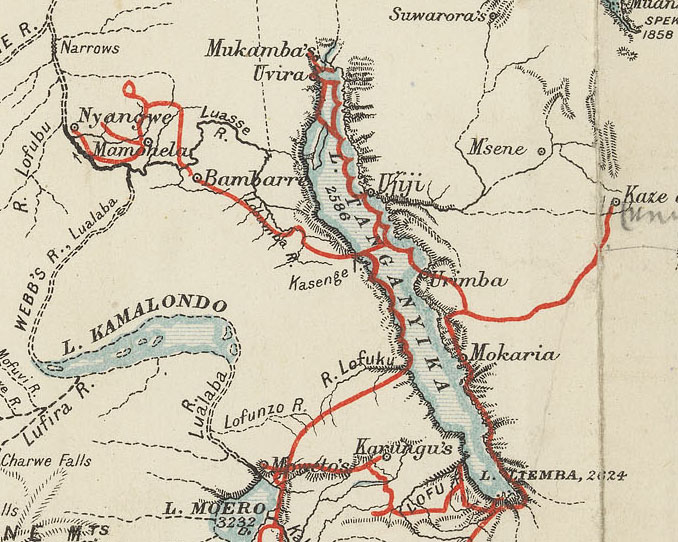 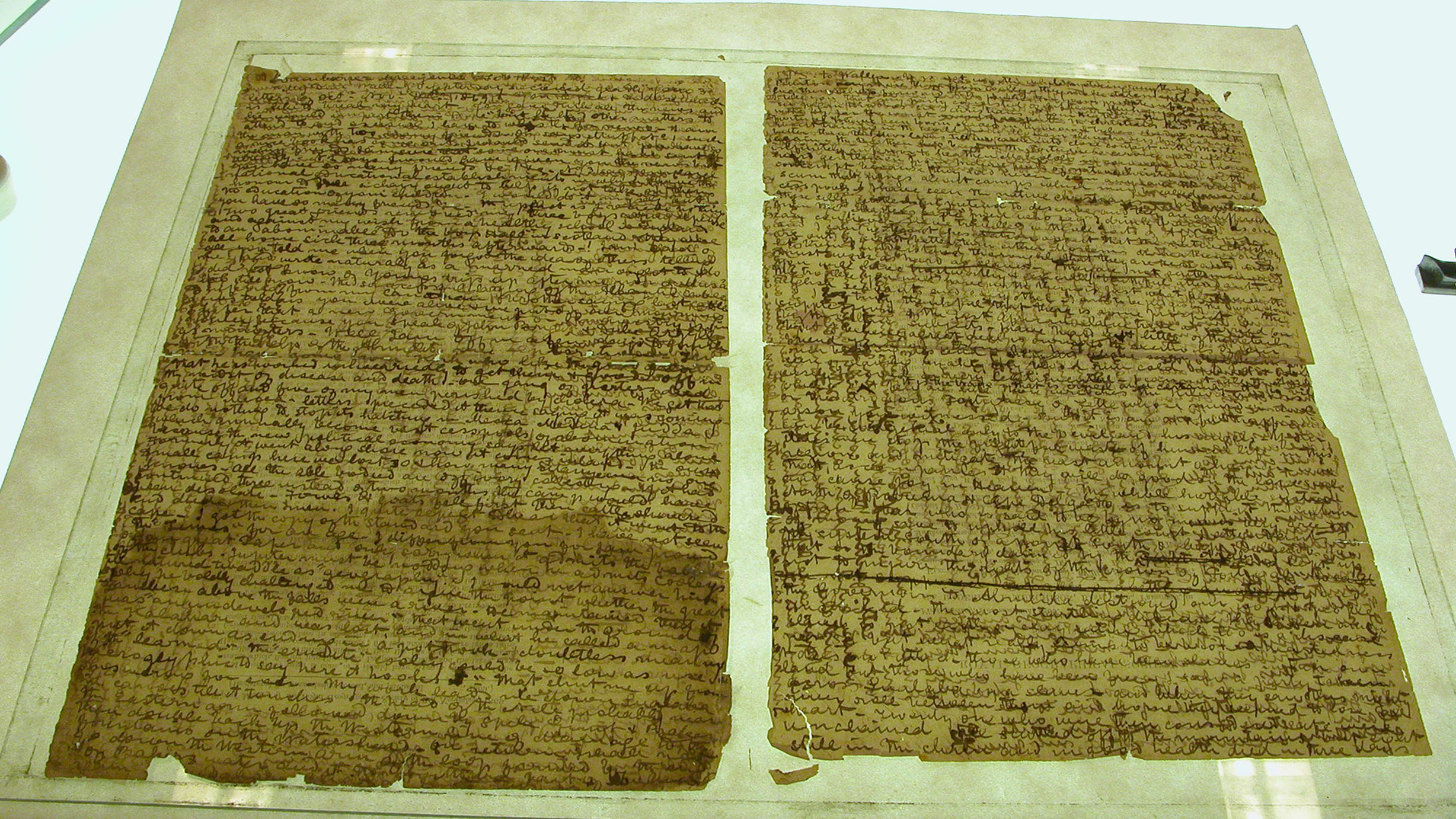 The two pages of the Letter from Bambarre side by side prior to conservation. Copyright Adrian S. Wisnicki. Creative Commons Attribution-NonCommercial 3.0 Unported

In the twentieth century, the letter surfaced at a Sotheby’s auction in London (Catalogue 1966:44), where it was purchased by Peter Beard, the American photographer. Beard, equally renowned for his photos of celebrities and Africa and African wildlife, was immediately taken with the letter and has remained so to the present day. In late 1966 or early 1967, he transported the letter to "Hog Ranch," his property in Kenya, which lies adjacent to the farm of Karen Blixen, author of Out of Africa.

Beard kept the letter there until 1991, when a termite infestation, which had already damaged some first edition Africana books, compelled him and his wife Nejma to take the letter to their home in Manhattan. "I carried the letter to New York from Kenya," writes Nejma Beard of transporting the framed letter. "I took it through London, with my baby daughter Zara under one arm and the letter under the other! It was heavy I can tell you" (private communication to A. Wisnicki).

In late 2009, just as the diary project was being developed, the Beards contacted Livingstone Online through an intermediary, Elizabeth Upper, and offered to make the letter available for scholarly study. Planning for the critical edition began there and then.