This page introduces Field Diary XV, which is part of our critical edition of Livingstone's final manuscripts (1865-73). The essay explicates the unusual form of this field diary (XV), which is not sequential but instead expands on many of the entries in the previous diary (Field Diary XIV). The essay also describes the new kind of notebook Livingstone used to create this diary.

Field Diary XV begins before the previous field diary (XIV) ends, while Livingstone is still in Unyanyembe. The two diaries cover about two months of the same time period, July-September 1872. It is not clear why Livingstone kept two diaries, though Field Diary XV contains longer narrative passages. During this time, Livingstone waits for his men to return from guiding Stanley to the coast and then finally leaves Unyanyembe on 25 August 1872, heading west to Lake Tanganyika. From there, he and his men travel south around the lake. 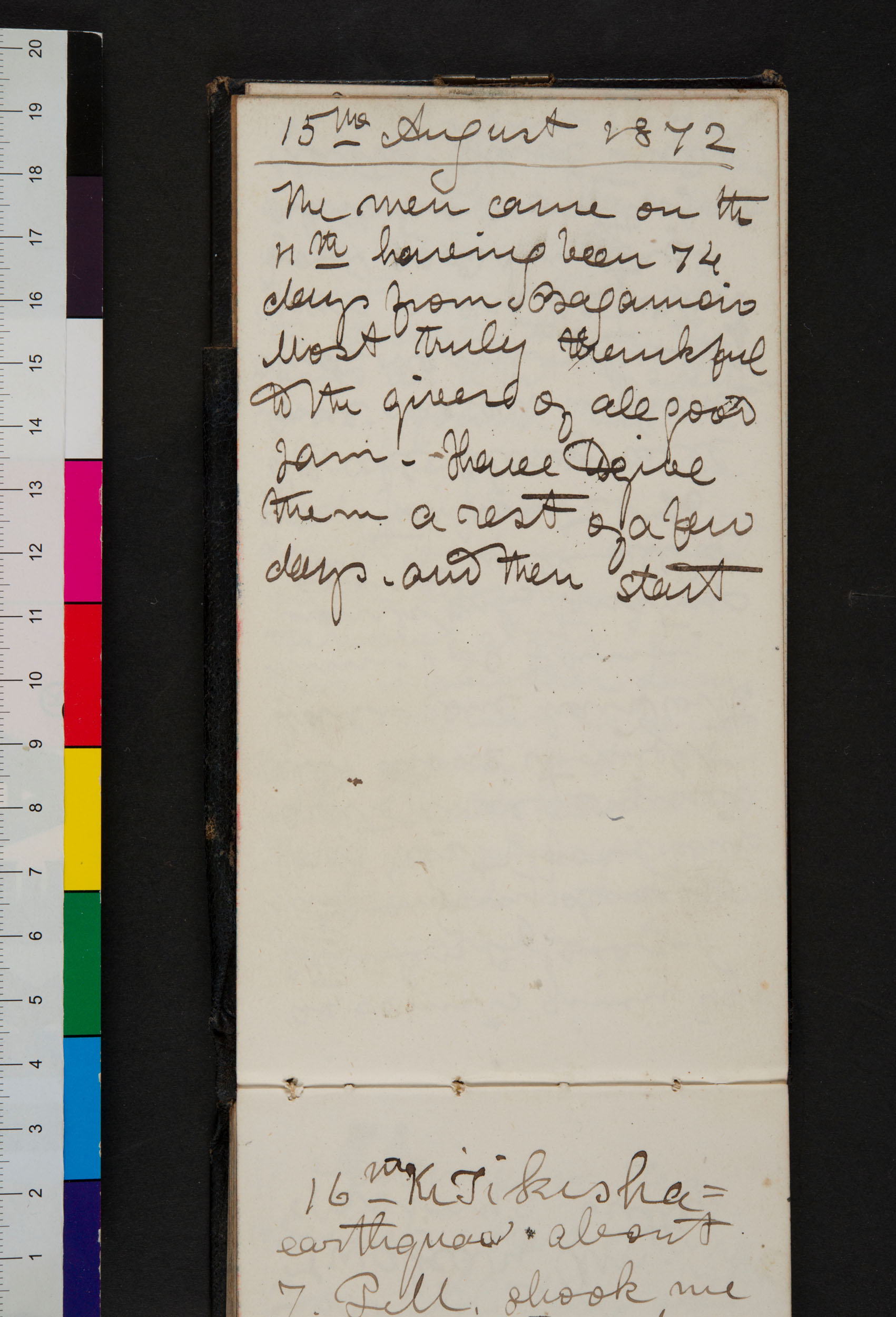 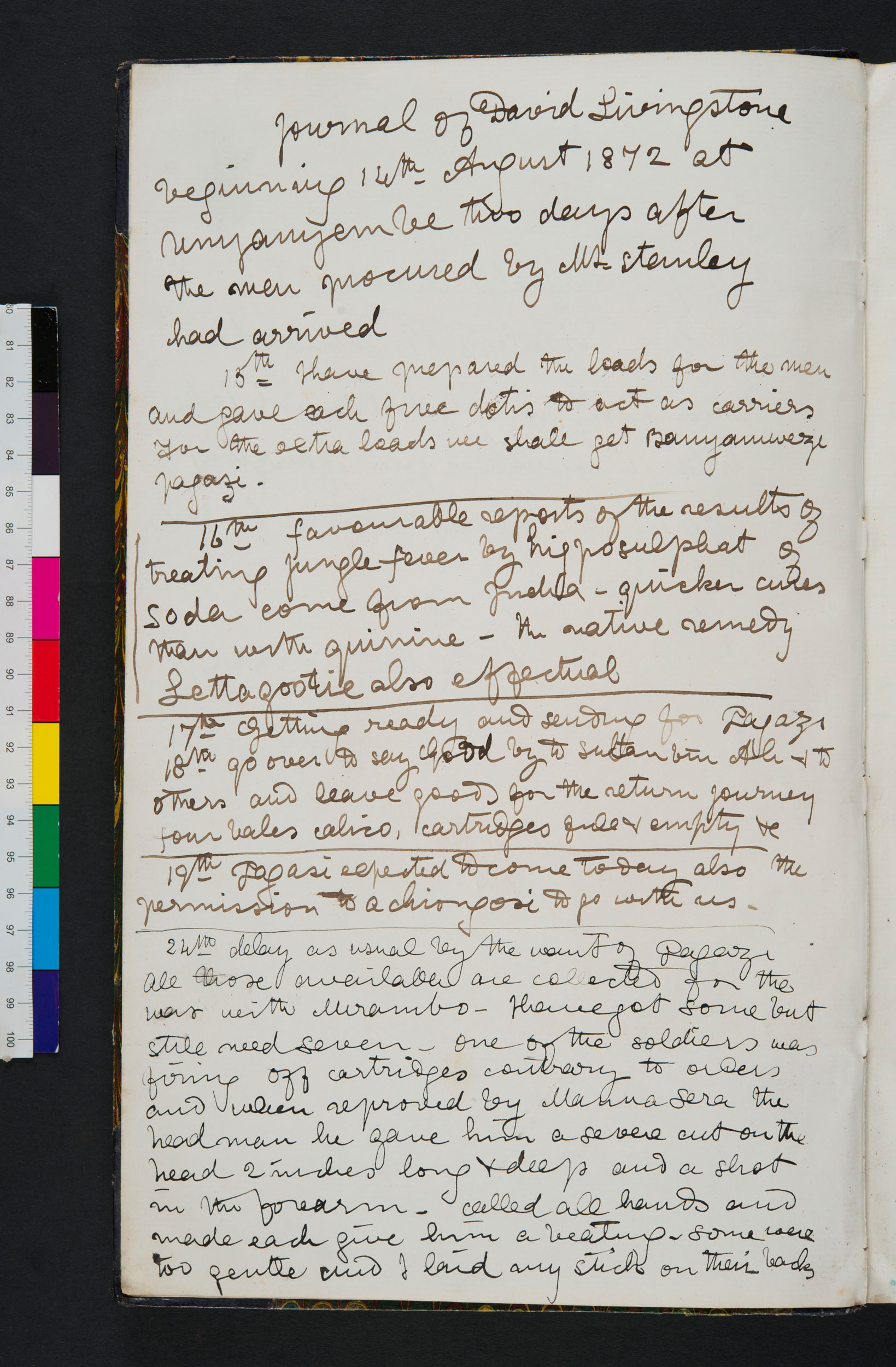 Livingstone uses Field Diary XV to expand on his brief descriptions in Field Diary XIV of the local conflicts raging in the region. He reports that the Africans, comprising several different groups headed by chief Mirambo, have challenged the Arabs, who in turn have hired some of the Watuta people to fight for them, as well as calling for more Arab men, though the latter never arrived. Together, these circumstances leave "all trade at a standstill" (Livingstone 1872g:[15]).

Though Livingstone does not explore the reasons for the conflict, it seems to be in response to the Arab treatment of Africans; the hiring of the Watuta, however, complicates the strict African / Arab divide. In addition, the Arabs bring in a cannon, which epitomizes the layers of imperial conflict being enacted on this site; it's "a brass seven pounder dated 1679 carried by the Portuguese commander in chief to China" (Livingstone 1872g:[6]). 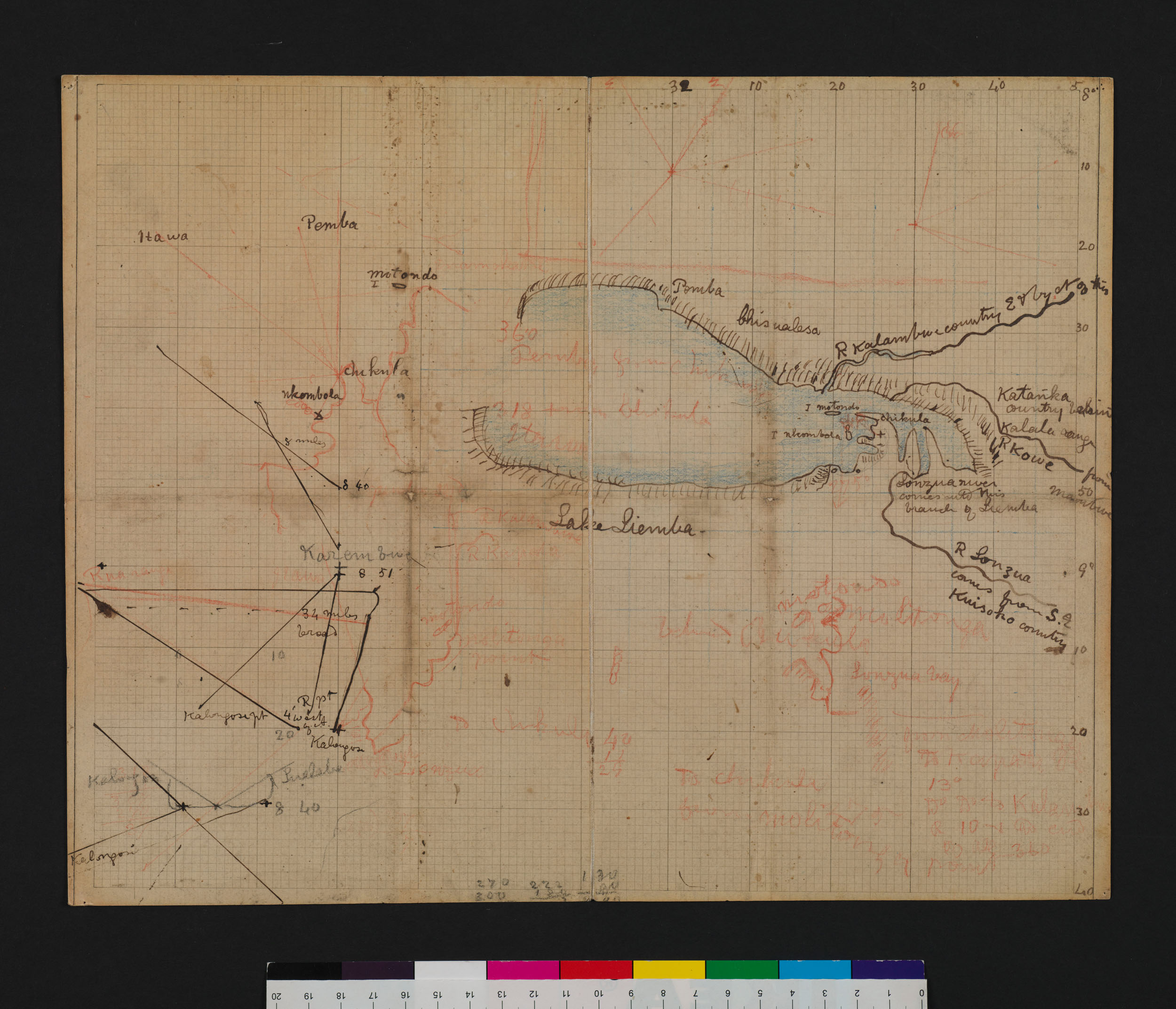 As in Field Diary XIV, we see Livingstone engaging in renewed communications outside of Africa. The upside-down section at the back of the diary does not act as notes to be expanded upon in the front but rather contains several long screeds on Livingstone's standing with the Foreign Office based on reports by Dr. Kirk. Though Kirk apparently reported "that he had sent off supplies & men," Livingstone counters that these are only "half truths" because Kirk handed the supplies off to a group of slavers who did not complete the delivery (Livingstone 1872g:[118]).

This disagreement leads Livingstone to contemplate his career and to make many more philosophic and religious statements about empire than he usually includes in his field notes. For instance, he sees the disagreement with Kirk as "nothing less than the maintenance of British European influence to carry out the great work of civilization which Providence in its wisdom has entrusted to our nation" (Livingstone 1872g:[118]). Many of these statements are written either in black ink or ink over pencil, suggesting that Livingstone was particularly invested in the longevity of these reports. 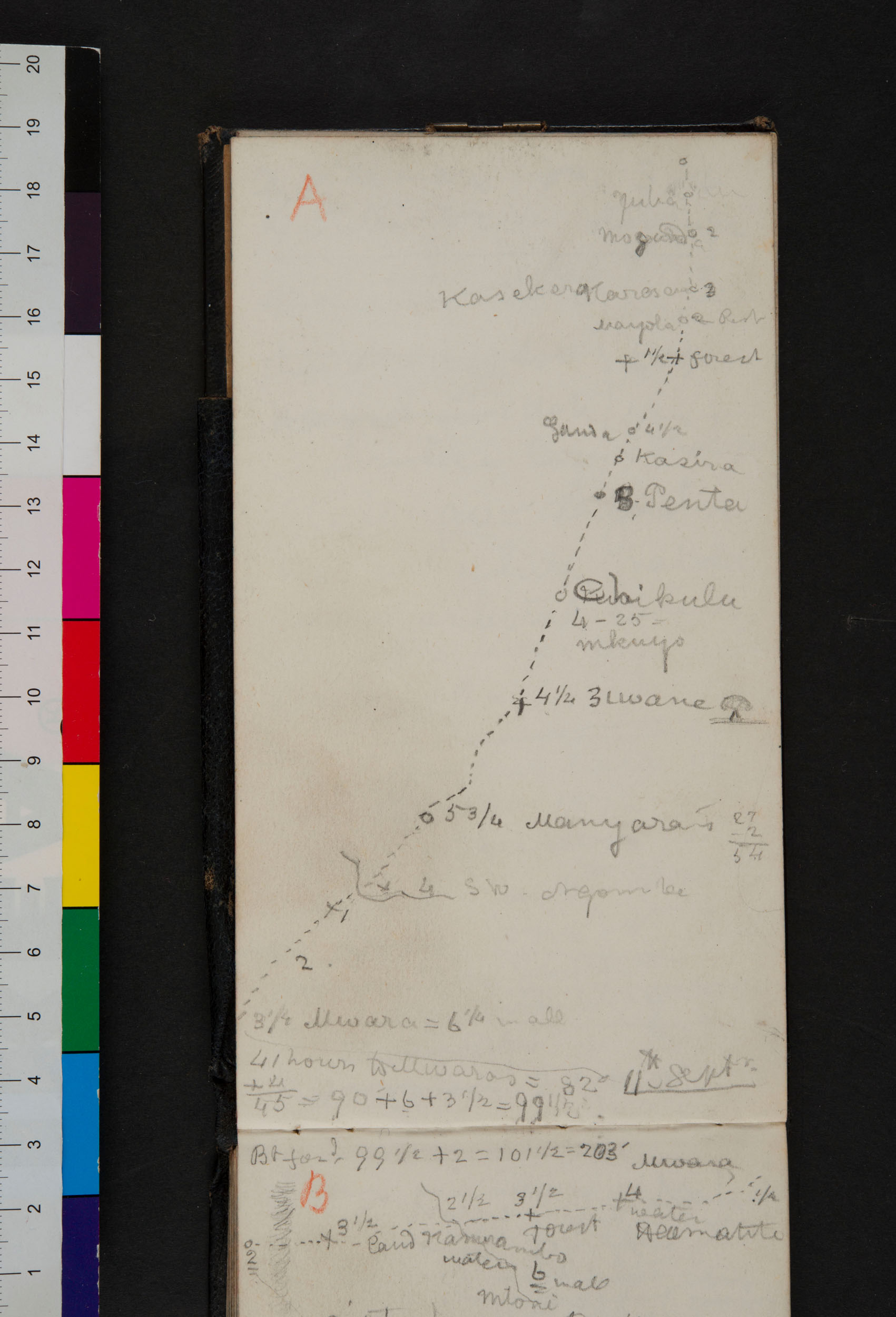 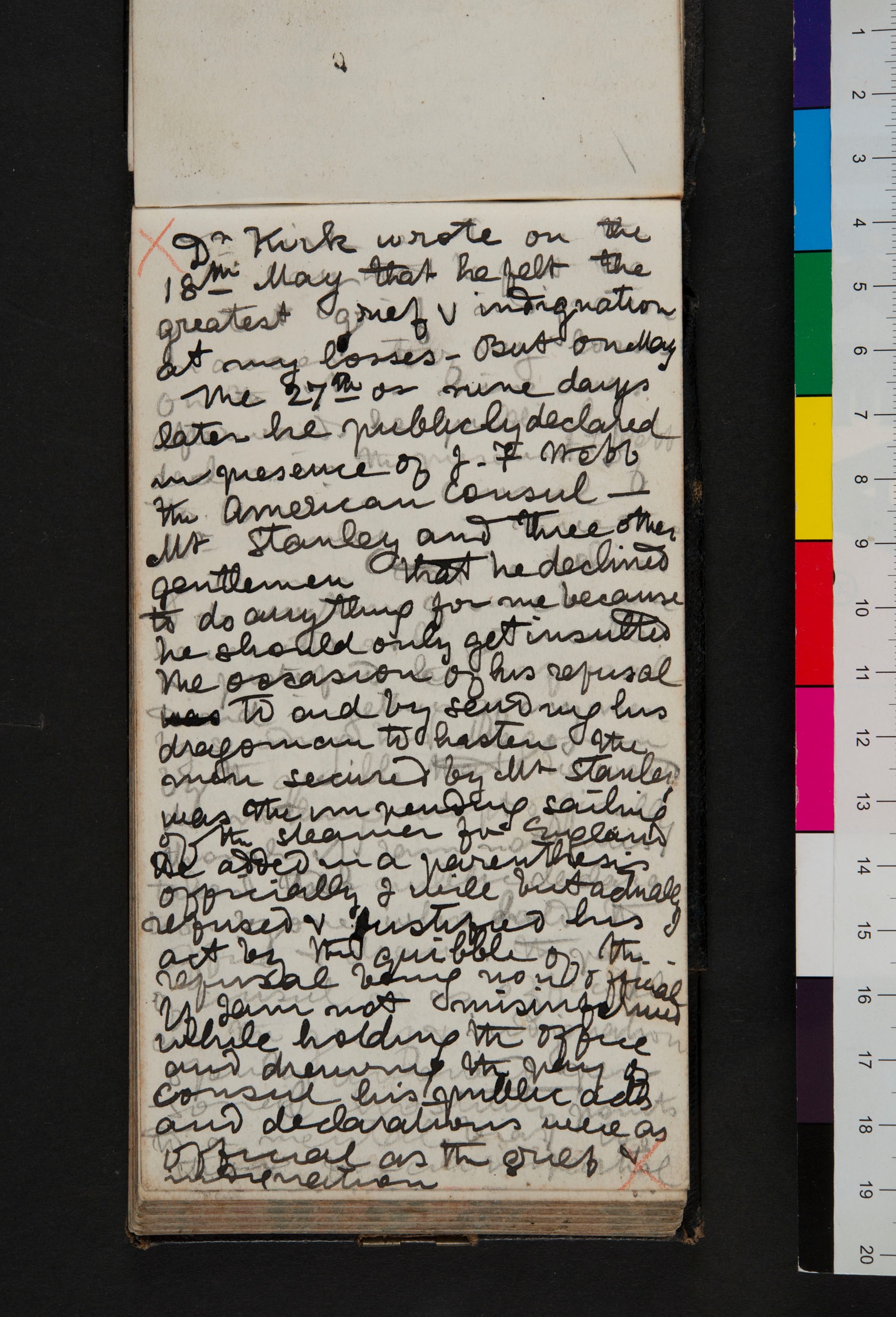 In between these records of local conflict and far-flung politics, Livingstone documents botanical, meteorological, and geological information. He also mentions an earthquake on 16 August 1872 and includes many lists of goods, some of them allied with names of specific people. As has now become common, many of Livingstone's entries record his struggles to obtain sufficient food and to deal with illness in himself and his men.

Field Diary XV also presents a new kind of book, this one bound in black, with a spine at the top and a metal clasp at the bottom. It measures 157 mm high by 92 mm wide by 17 mm high, with an 1868 calendar on the rear endpaper. The final page of the book also includes a list of months written in transliterated Arabic, including Ramadan for that year. 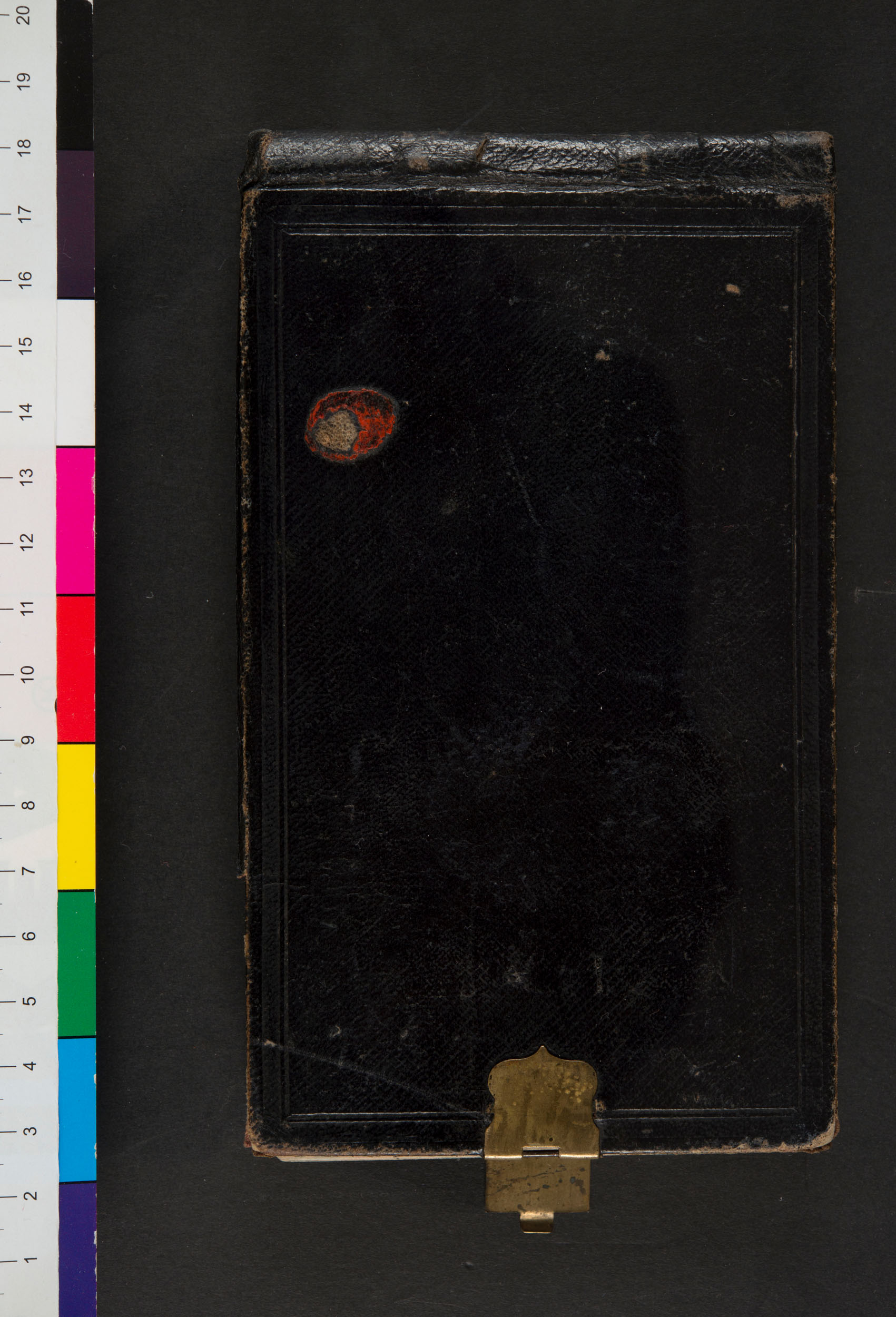 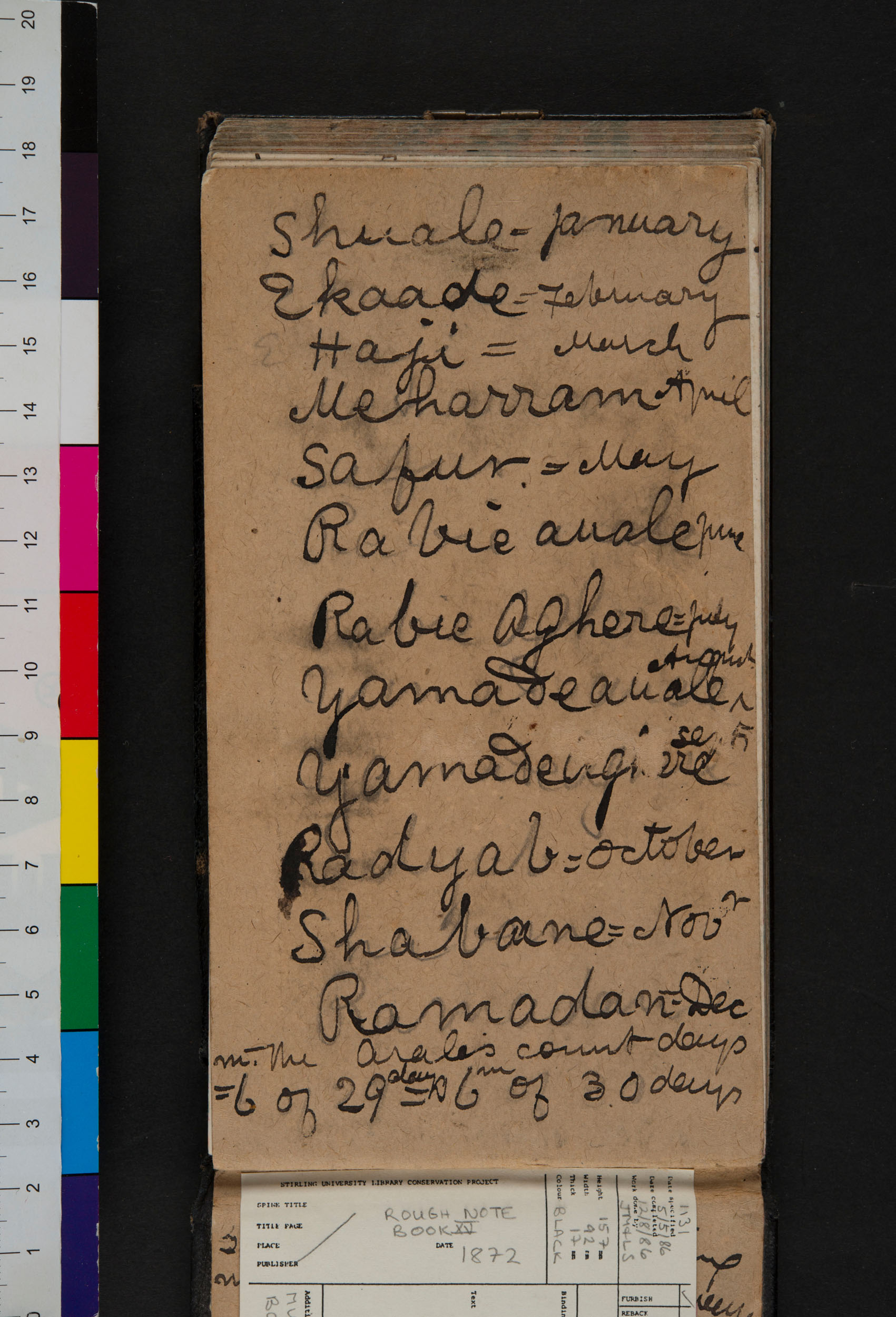