This page introduces Field Diary XVI, which is part of our critical edition of Livingstone's final manuscripts (1865-73). The essay assesses the large quantity of meteorological and topographical calculations that Livingstone recorded in this, his last completed field diary. The essay also describes the form of this diary, which is the same as that used for Field Diary IV. 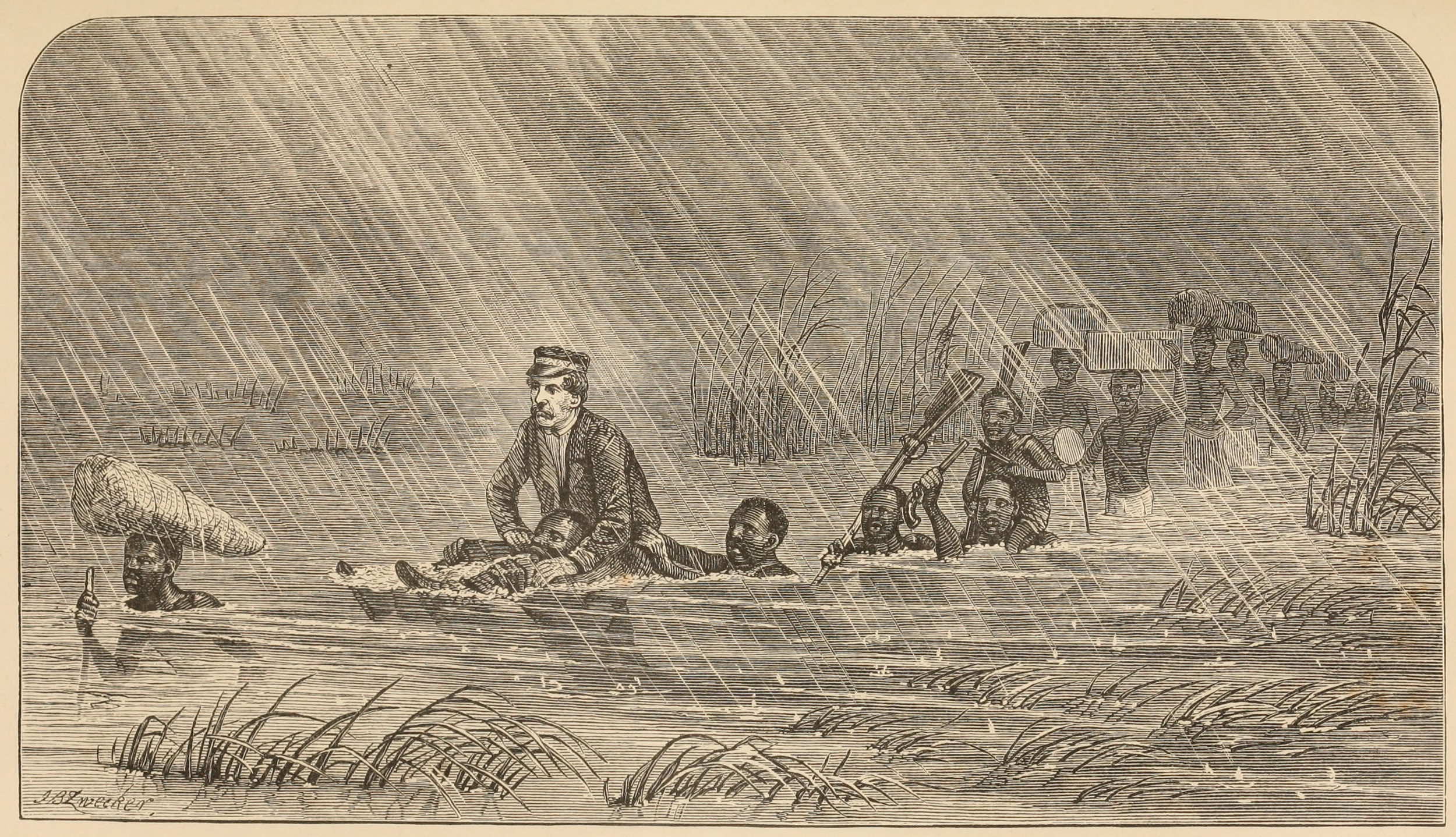 'The Main Stream Came up to Susi's Mouth.' Illustration from the Last Journals (Livingstone 1874,2:opposite 268). Courtesy of Internet Archive.

This diary contains several meditations on his use of force with Africans. He and his men are shut out of local villages or the villagers run away upon their approach. This also makes obtaining food, guides, and geographical information very difficult during this time. Livingstone attributes this to a fear of guns, as when he believes himself to have been "treated scurvily by [chief] Chungu [...] It is terror of guns" (Livingstone 1872h:[53]).

Perhaps because of this, Livingstone continues to assert authority over local situations but also question his approach. For instance, when he enters a village where "some had bought or stolen little children," he "ordered them to be returned." When one man "swore that he did not know from whom he got the child," Livingstone "gave him one blow as a thief & ordered him out of the camp" (Livingstone 1872h:[48]). He even goes so far, in a different situation, to punish local villagers against the desires of their headman (Livingstone 1872h:[169]). 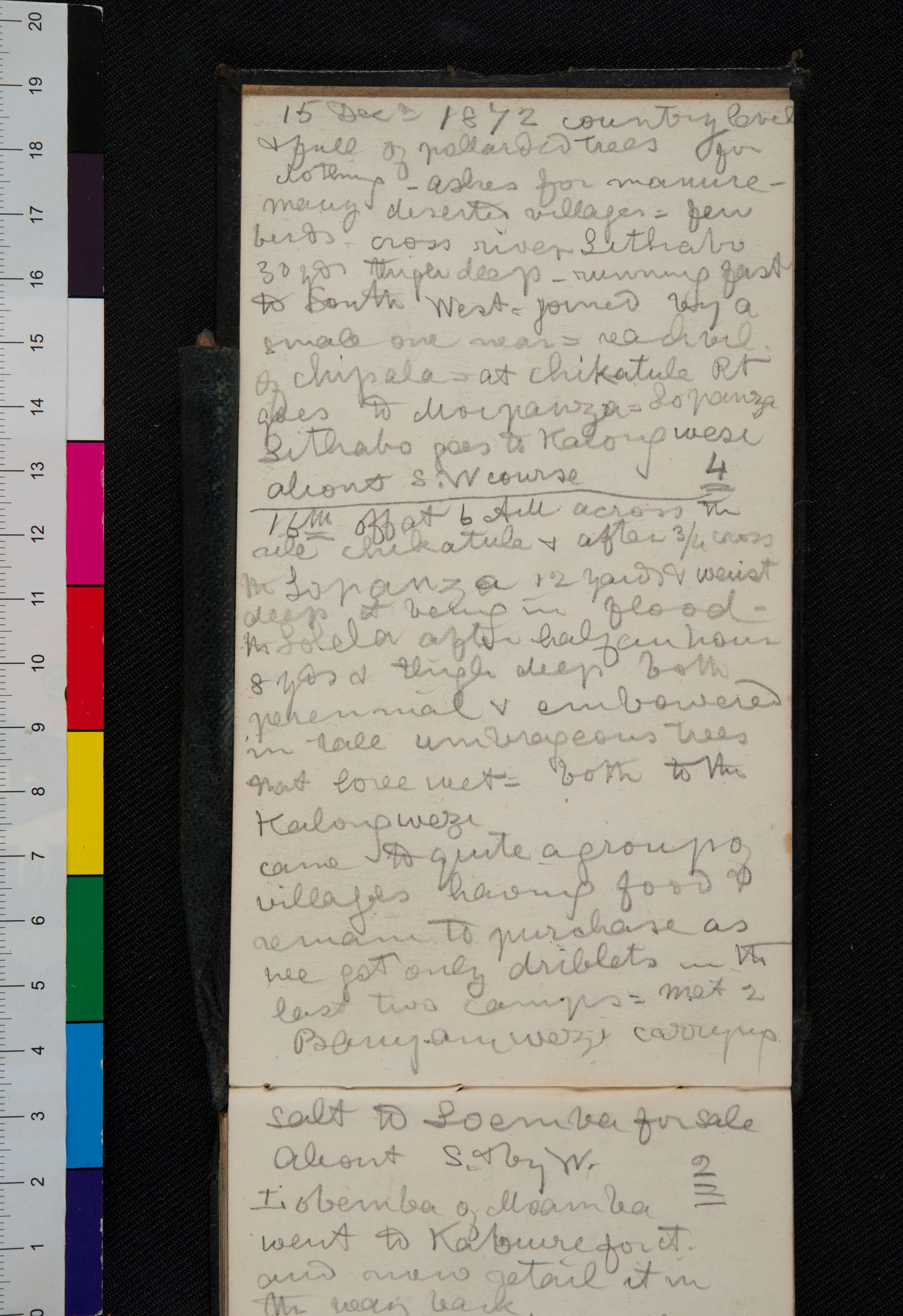 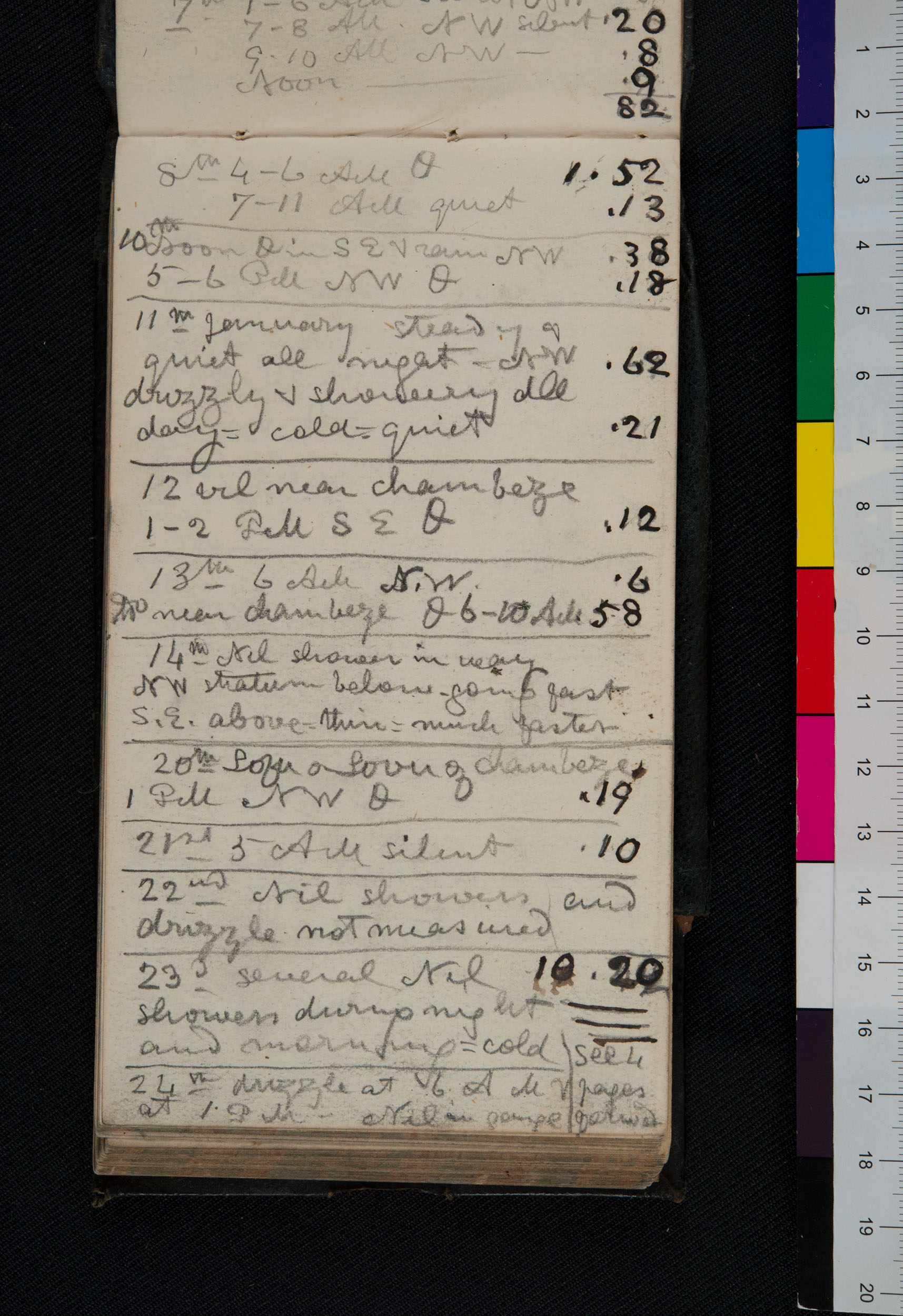 At the same time, however, Livingstone also wonders if the difficulties he encounters on this portion of his journey stem from not being authoritative enough: "I have gone among the whole population kindly & fairly but I fear that I must now act more rigidly for when they hear that we have submitted to injustice they at once conclude that we are fair game for all" (Livingstone 1872h:[97]). He ponders whether shows of strength or mediation are best to achieve his ends, though nowhere does he question his essential authority or the morality of those ends.

Livingstone writes Field Diary XVI in the same kind of book as Field Diary XV, a black flip-top with a metal fastener at the bottom. It, too, contains an 1868 calendar, though it has a printed page pasted to cover it. This diary is notable for citing the women traveling with Livingstone's group. Written primarily in grey pencil, with additions in red pencil, the upside-down section runs from the end of the diary to page [137]. The section contains many rainfall records; even when in great pain, Livingstone's scientific observations and calculations continue, including geographical and botanical information. The back section is primarily short notes and lists, mixed with focused narrative accounts about singular incidents. Livingstone describes in detail the process of a caterpillar laying eggs, as well as the story of how he and his men saved a little girl who had been abandoned. 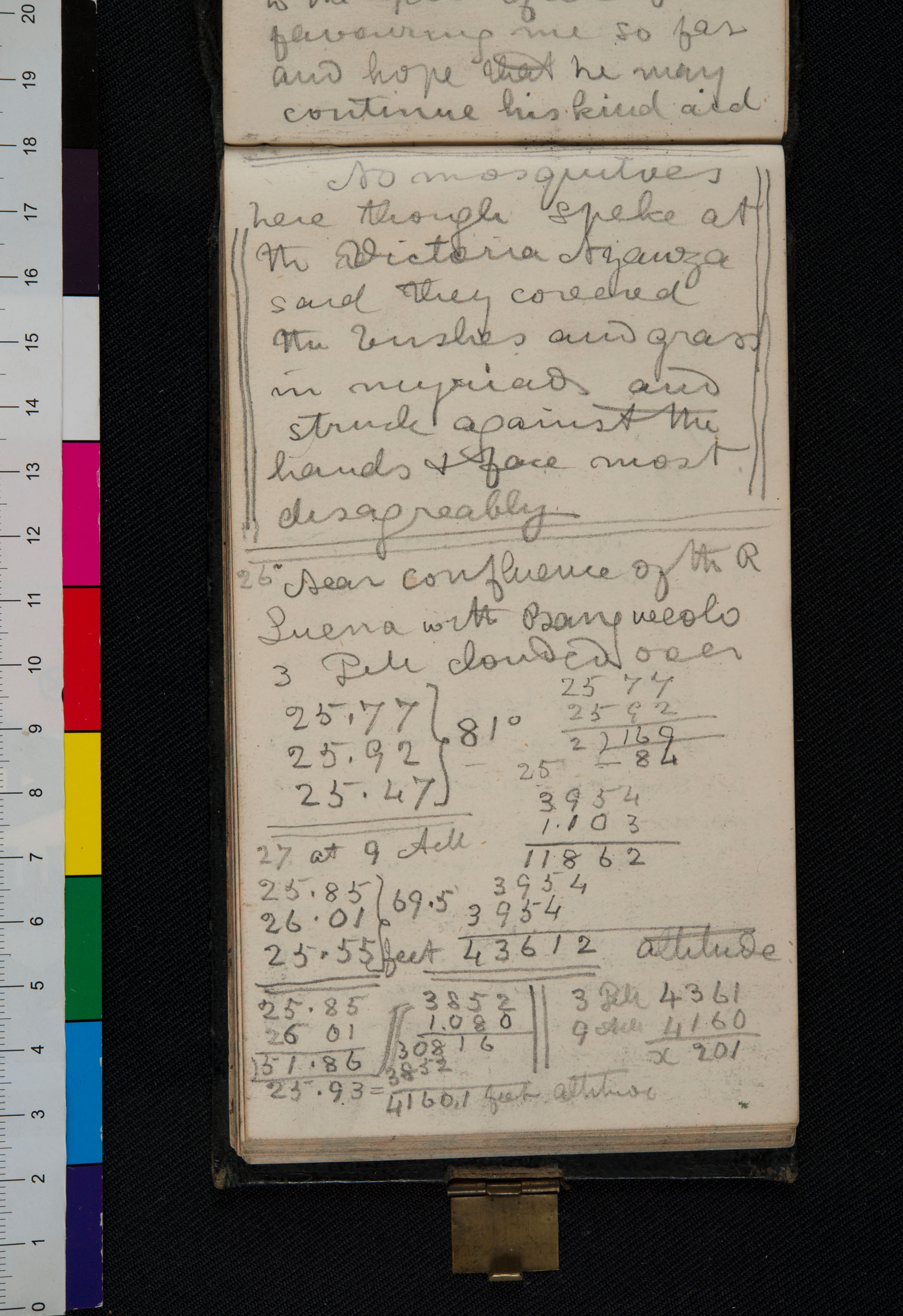 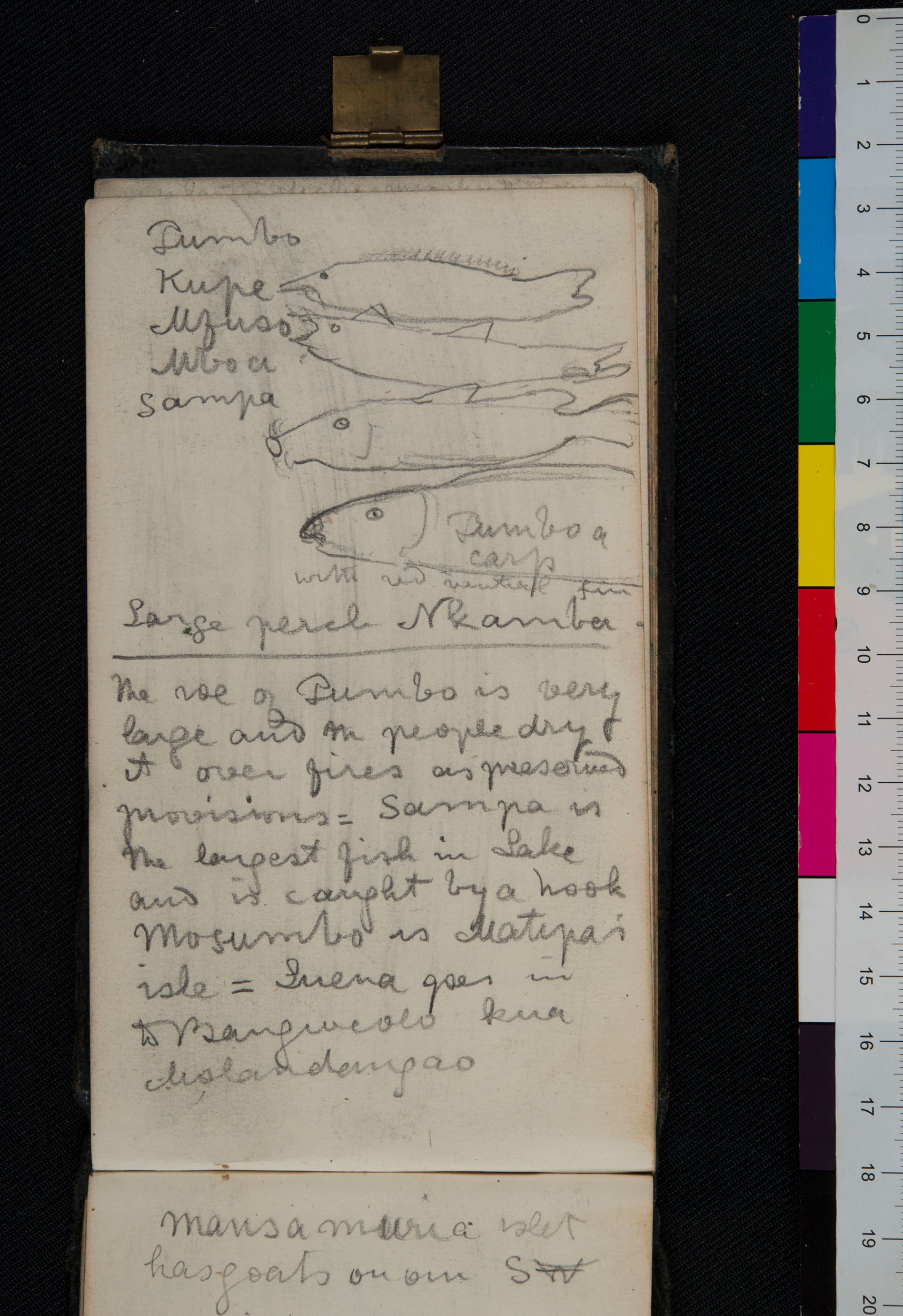