One More Voice (2020-present) is a new digital humanities project that focuses on recovering non-European contributions from nineteenth-century British imperial and colonial archives. The name reflects the fact that there is always one more voice to recover from the archives. The project centers on a variety of non-European creators, some of whom will be familiar to users of Livingstone Online such as Sechele, Jacob Wainwright, and Tippu Tip, and many whose backgrounds are not directly linked with nineteenth-century British exploration in Africa, for instance, E. Pauline Johnson, Sarojini Naidu, Cornelia Sorabji, Frederick Douglass, and many, many others. The project includes a handful of staff members from Livingstone Online and draws on various Livingstone Online practices and ideals, but the project also has a decidedly different focus, brings in new collaborators, and takes a digital approach that differs considerably from that of the main Livingstone Online project. 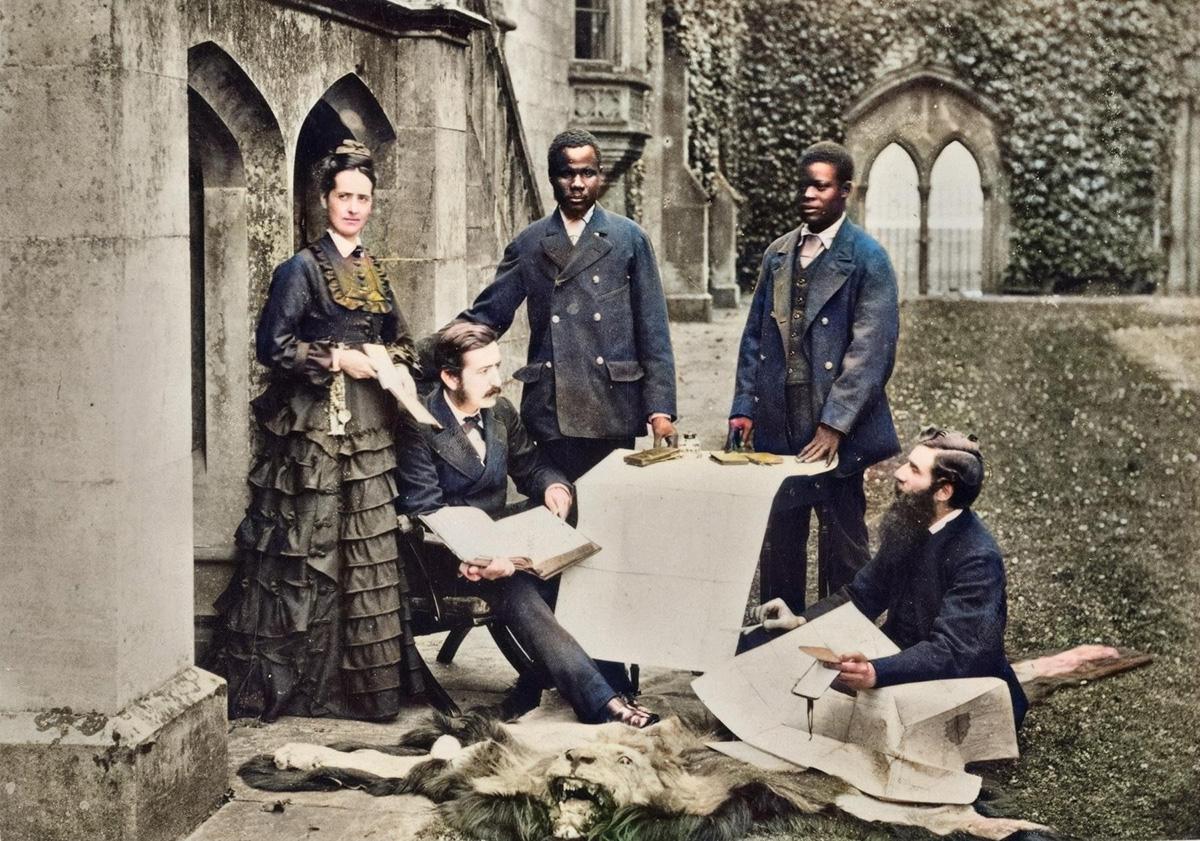 Colorised version of R. Allen & Sons, Agnes and Thomas Livingstone (Daughter and Son of David Livingstone), Abdullah Susi, James Chuma, and Rev. Horace Waller at Newstead Abbey, Nottingham, Discussing the Journals, Maps, and Plans Made by the Late David Livingstone (1874). SOAS Library, University of London. Copyright Council for World Mission. Used by permission for private study, educational or research purposes only. Waller interviewed Chuma and Susi in 1874 about David Livingstone's final days. The interview notes (Horace Waller, James Chuma, and Abdullah Susi, “Notes from Chuma and Susi on Livingstone’s Last Journey” [Unpublished manuscript, 1874], MSS. Afr. s. 16 / 4-5, no. 24, Bodleian Library, Oxford) – written up and mediated by Waller, but inclusive of apparently verbatim data provided by Chuma and Susi – embody a good instance of the source material complexities that the One More Voice project has set out to engage.

One More Voice builds on the fact that non-European contributions in imperial and colonial archives take multiple forms and appear in multiple genres. These genres include travel narratives, autobiographies, letters, diaries, testimonies, interviews, treaties, maps, oral histories, genealogies, and vocabularies. The project seeks to foreground or otherwise spotlight the non-European contributions to these genres – in the form of both authored pieces and as manifest or presented in pieces by other, usually European, authors – by publishing the relevant documents (especially manuscripts and periodical press articles) in critically-edited, digital facsimile form. To support this core publishing mission, One More Voice also collects visual materials, enumerates relevant published book-length works by non-European (most Anglophone) authors from around the Victorian globe, and even curates a small selection of motions pictures and sound recordings. Critical essays on the project's theoretical approach, design, collaborative practices, methodology, and a growing number of non-European creators such as NoSuthu Soga Jotelo and Andries Botha complement the project's collected primary works.

As a digital entity, One More Voice is a descendant or “imprint” site of Livingstone Online, meaning that the former derives from the latter and so, for instance, uses the latter's primary materials, publication strategies, and workflows as needed. However, One More Voice also diverges in multiple ways from the practices of the main Livingstone Online project. For instance, One More Voice is rooted in minimal computing methodologies. This means that it foregoes a lot of digital bells and whistles, and instead focuses on elements such as minimal design and minimal maintenance. The site’s footprint (circa 120 MB) is miniscule by comparison to that of the main Livingstone Online site (over 1.5 TB). In taking its minimal computing approach, One More Voice prioritizes text-based digital facsimiles over high-resolution images and practices what might be called "digital recycling" by linking to (rather than natively hosting) materials from sites such as the Internet Archive and HaithiTrust. Even more than Livingstone Online, One More Voice also prioritizes accessibility and incorporates features such as the use of a color blind safe color scheme, an aesthetic framework that cuts down on visual noise and clutter, and recourse to structural features that enable access by assistive devices. 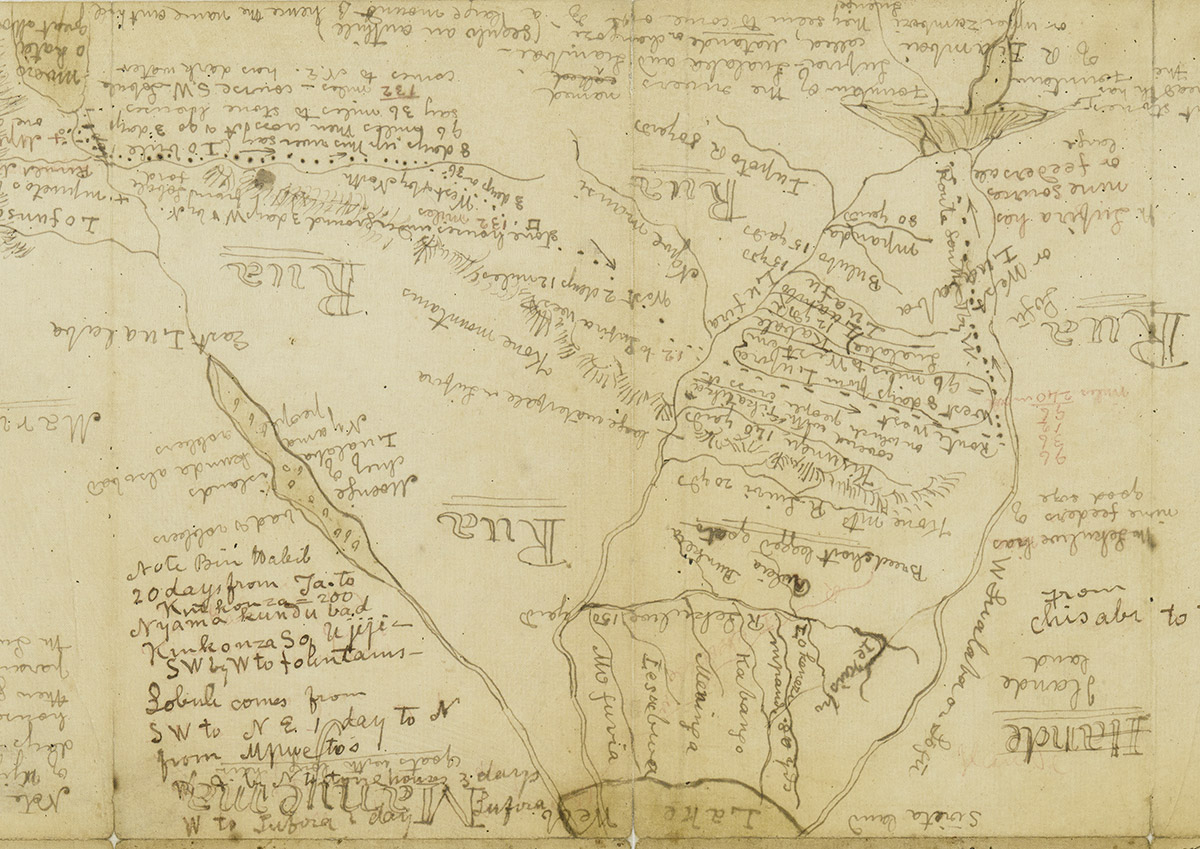 Detail from David Livingstone et al., Annotations on Map from John H. Speke, Journal of the Discovery of the Source of the Nile (1863) ([1869-1873]). Copyright National Library of Scotland and Dr. Neil Imray Livingstone Wilson (as relevant). Creative Commons Share-alike 2.5 UK: Scotland. This map includes geographical data collected from Said Bin Habib (also called Said Bin Habeeb), a well-known Arab trader in East Africa. The data appears in the lower left-hand part of the image and is one of the few bits of text that is right-side up. Somewhat exceptionally, Livingstone actually cites the source on the document itself (“Note Bin Habib”). The map offers an excellent example of how a document usually attributed to Livingstone alone actually incorporates the voice of a non-European informant.