This section concludes our analysis of the state of the 1870 Field Diary manuscript by summarizing the previously documented history of the diary and by using our findings in the foregoing parts of this essay to develop a comprehensive new chronology of the manuscript.

The pages of the 1870 Field Diary record the long and complex history of this fascinating manuscript, one of the most visually arresting and textually intriguing documents produced by British nineteenth-century travel in Africa.

Until the work of the present project team, this history has remained largely unknown.

However, recourse to existing documentation, close analysis of the manuscript, reasonable inference, and, most importantly, use of advanced spectral imaging technology have now enabled us to recover and reconstruct the diary’s history in a detailed and comprehensive manner.

Animated spectral image of a page from the 1870 Field Diary, second gathering (Livingstone 1871a:LXXVI [v.1]). Copyright David Livingstone Centre. Creative Commons Attribution-NonCommercial 3.0 Unported. The animation combines a variety of spectral images to demonstrate how Livingstone built up layers of text on the page.

This section concludes our analysis of the state of the 1870 Field Diary manuscript by summarizing the previously documented history of the 1870 Field Diary and by using our findings in the other parts of this essay to develop a comprehensive new chronology of the manuscript that relies on the evidence of the diary pages themselves – in other words, a chronology that underscores the considerable potential of spectral imaging technology to expand our understanding of Livingstone’s diary and, potentially, those of other nineteenth-century British travel writers.

Roughly speaking, the field diaries and journals from Livingstone final expedition (1866-73) followed one of three trajectories before their arrival in Britain. Livingstone entrusted the massive Unyanyembe Journal (1866-72) to Henry Morton Stanley in March 1872, and Stanley carried that journal back to Britain where it became the basis for Horace Waller’s edition of the Last Journals (1874). Livingstone kept another fourteen field diaries from the final expedition (field diaries I-XIII [1866-71] plus one from a previous expedition) in a box at Ujiji, where the British explorer Verney Lovett Cameron recovered them in February 1874, after Livingstone’s death. These arrived too late to be of use to Waller. Finally, Livingstone carried the 1870 and 1871 Field Diaries plus a handful of other diaries (field diaries XIV-XVII [1871-73]) with him until his death in present-day Zambia in 1873. These diaries also accompanied Livingstone’s body back to Britain. 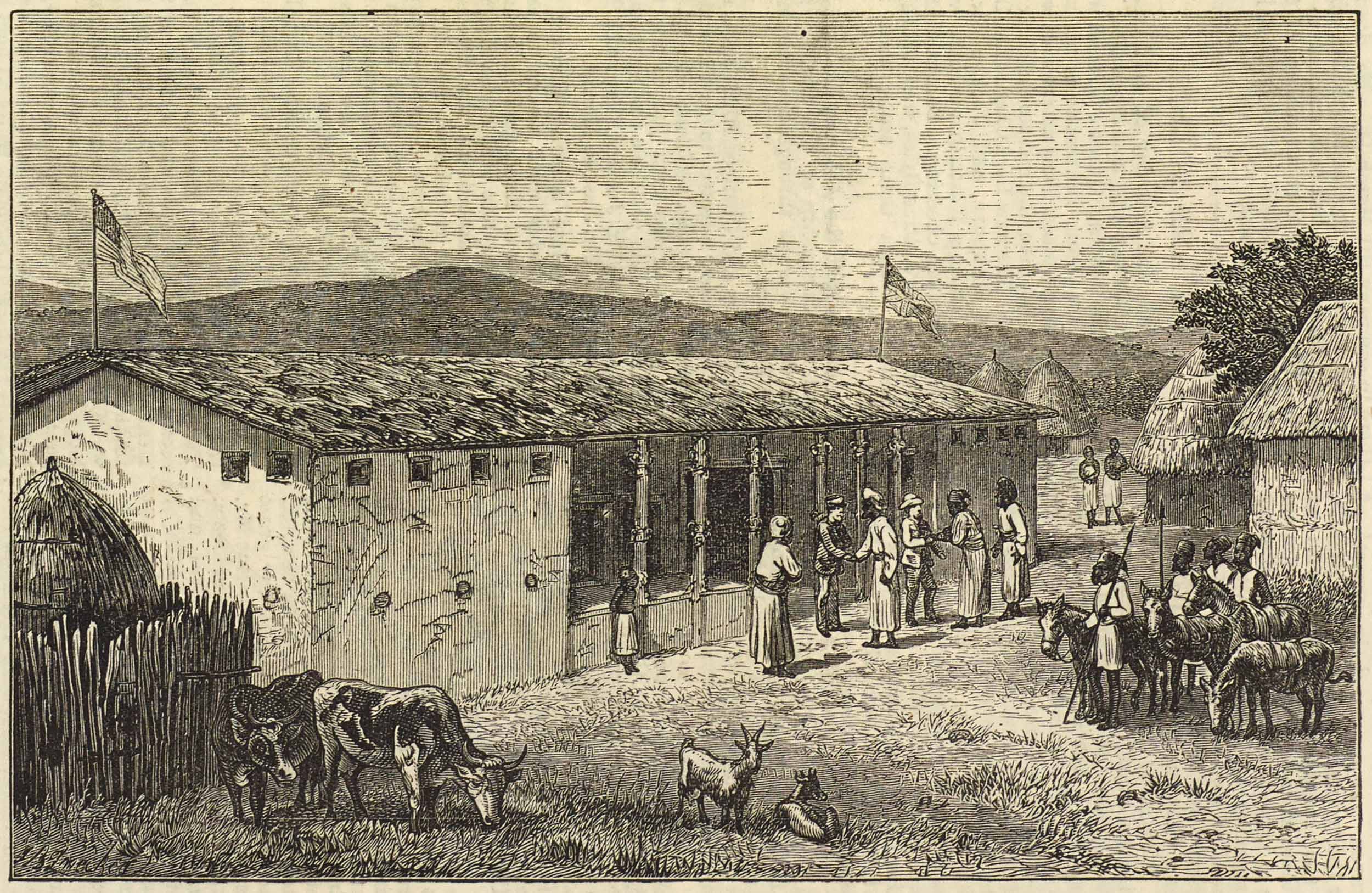 "Visit of Arabs to Livingstone and Stanley at Unyanyembe," from a review of Henry M. Stanley's "How I Found Livingstone," Illustrated London News, 20 (1872), 485. Copyright National Library of Scotland. Creative Commons Share-alike 2.5 UK: Scotland. It was in Unyanyembe that Livingstone parted with Stanley and entrusted to him the massive journal that now bears the name of the village.

Once back in Britain, the 1870 Field Diary (and at least a part of the 1871 Field Diary) passed to Livingstone’s daughter Agnes. Agnes then transcribed these materials – including portions of the 1870 Field Diary that seem no longer to survive in the original (Livingstone 1870d, 1870g) – for Horace Waller, Livingstone’s friend and editor, who later recognized her efforts (Waller, in Livingstone 1874,1:iv). Agnes’s handwritten transcription was typeset, revised, and soon became the basis for the relevant portion of the Last Journals. Recourse to the 1870 Field Diary, in this case, occurred in part because the diary – in contrast to Livingstone’s other final field diaries – offers a more detailed account of the given period than the Unyanyembe Journal, which Waller usually used in the first instance. 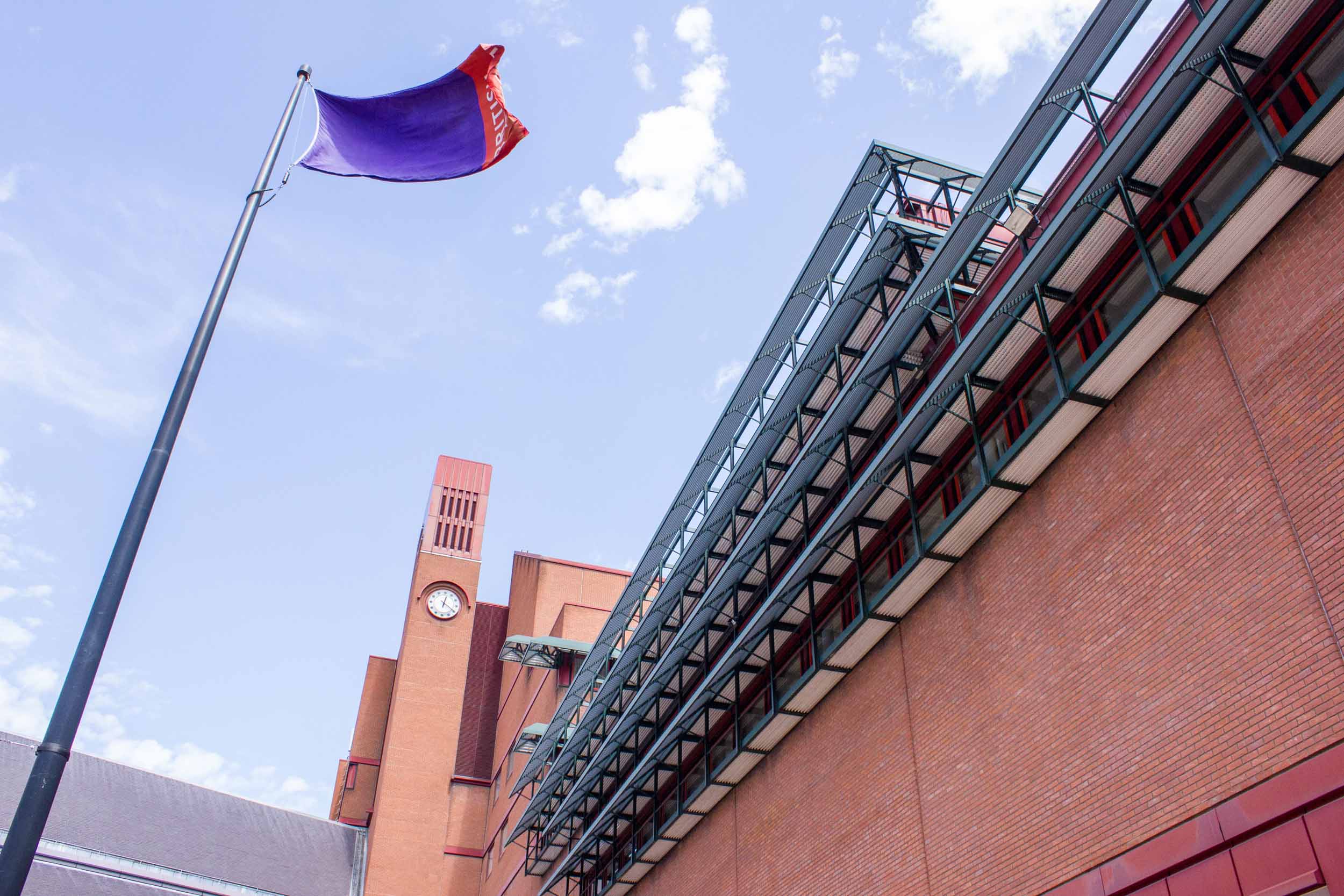 Finally, the remaining pages (Livingstone 1870b, 1870f, 1870h, 1870j, 1871a) have a more complex history, as already detailed by the first phase of the Livingstone Spectral Imaging Project. These pages also passed to the Wilson branch of the Livingstone family, and this branch gifted them to the Scottish National Memorial to David Livingstone (now the David Livingstone Centre) on one more or more uncertain dates between the end of the 1920s and the period directly after World War II.

The pages then remained at the Centre until at least 1975; traveled to the National Library of Scotland in the late 1970s, where they were copied as part of the Livingstone Documentation Project; were erroneously handed off to the John Murray archive in London; then returned to the Centre at some indefinite point, probably in the early 1980s.

From the Centre, the pages made one final trip in March 1986 to Stirling University for conversation, returned to the Centre in May 1987, and then disappeared from view until rediscovered by Centre’s archivist Anne Martin in 2009 due to a research request from Adrian S. Wisnicki, director of the present critical edition.

Finally, in 2010, the Livingstone Spectral Imaging Project brought together nearly all the known pages of the 1870 Field Diary (and the 1871 Field Diary for that matter) at the National Library of Scotland for a two-week period. Here the project team spectrally imaged all the pages, plus a number of contemporaneous letters. These images form the basis of the present critical edition. 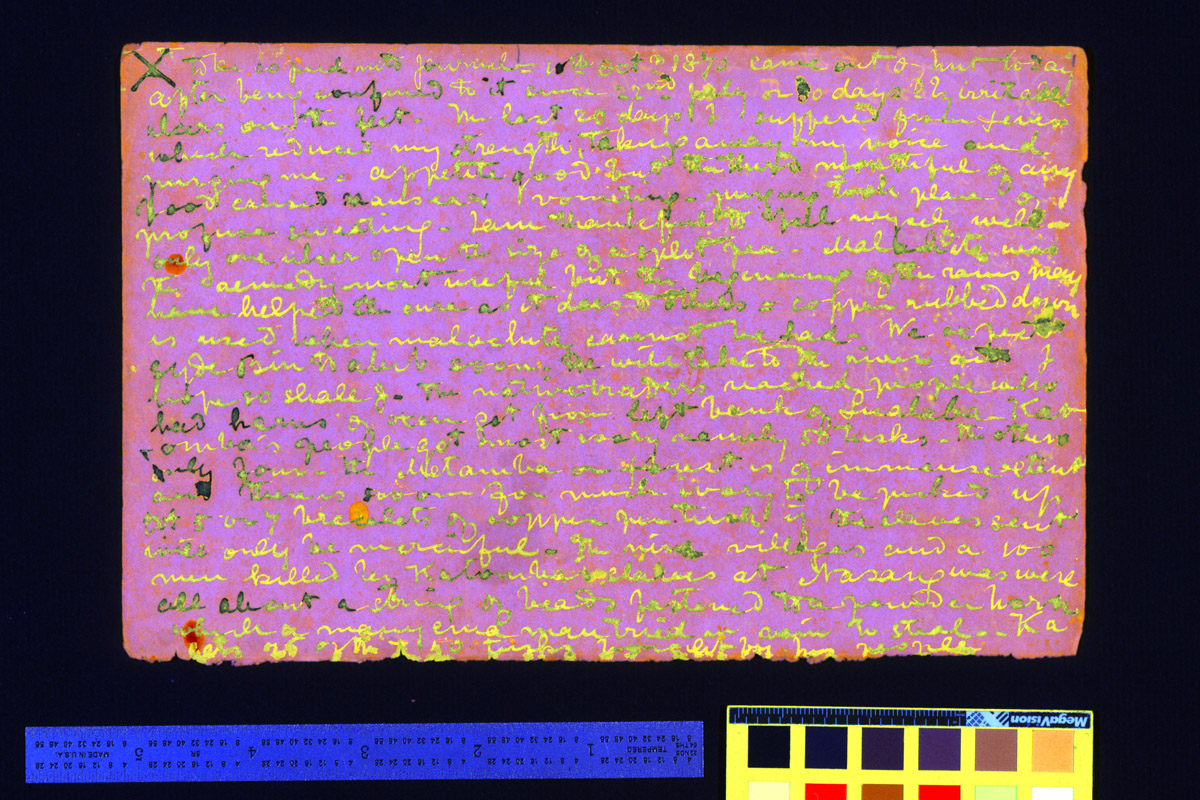 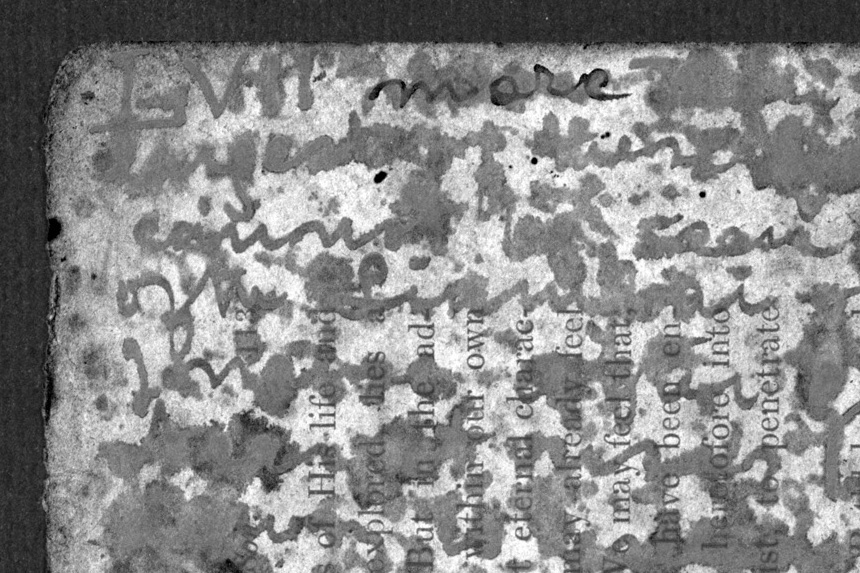 Processed spectral image of a particularly saturated page from the 1870 Field Diary (Livingstone 1870i:LVII IC4), detail. Copyright National Library of Scotland and, as relevant, Neil Imray Livingstone Wilson. Creative Commons Attribution-NonCommercial 3.0 Unported. The processing dramatically reveals Livingstone's reinking, at a later date, of one of the most smeared words on the page. 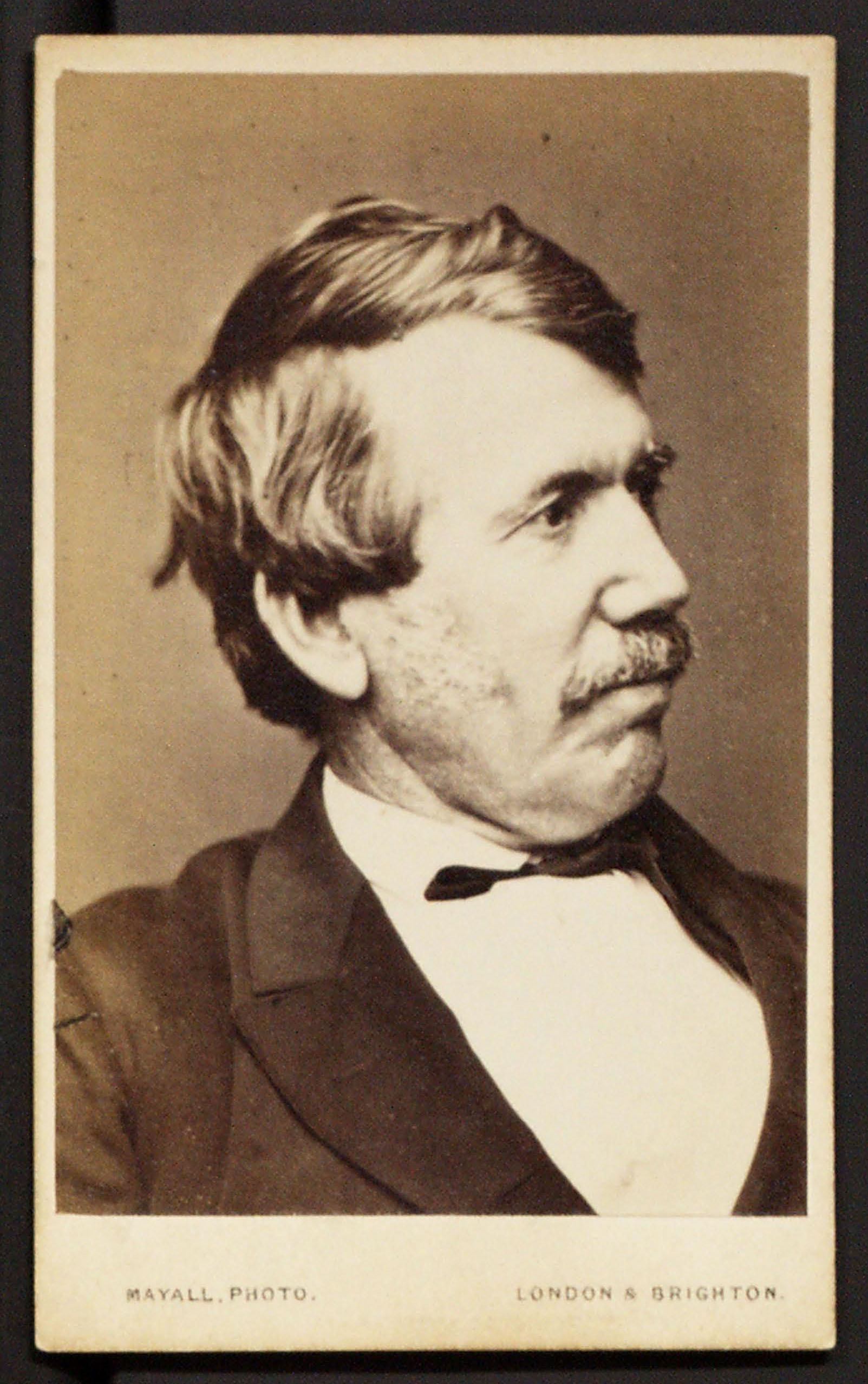 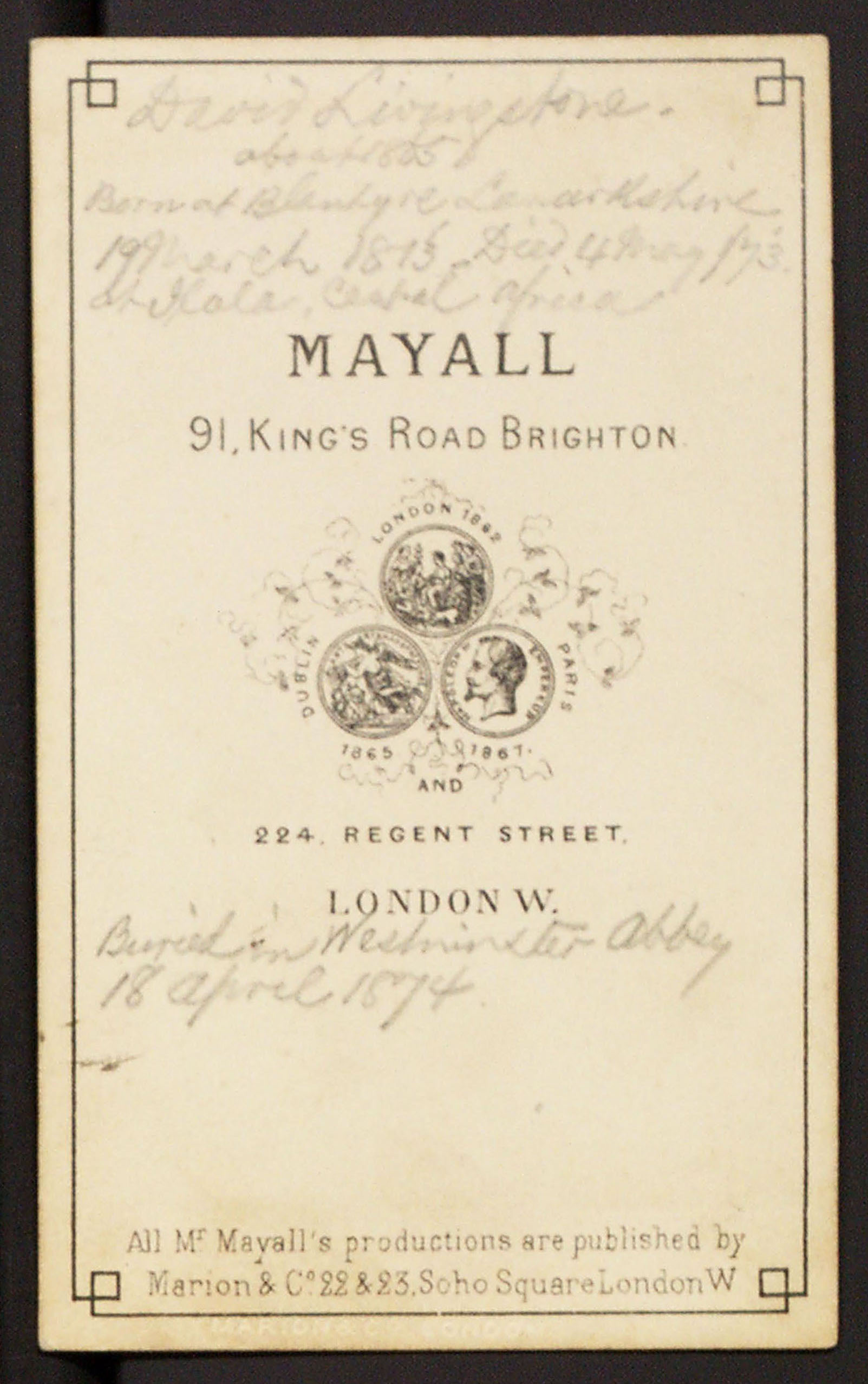 The present critical edition (2017), therefore, represents the last step in this historical sequence. The edition adds one final repository to the list, Livingstone Online, and brings together all the surviving the pages of the diary for the first time in over a hundred years.