This essay describes the background, objectives, workflow, and results of the development of animated spectral images (ASIs) for the present multispectral critical edition of Livingstone’s 1870 Field Diary.

A variety of spectral image processing techniques arose from our work on a multispectral critical edition of Livingstone’s 1870 Field Diary. These techniques have allowed us to study the passage of the diary across space, hands, and time and, ultimately, to develop a detailed chronology of the manuscript based on the material evidence of the manuscript itself (see our six-part State of the Manuscript).

A by-product of this work is our creation of animated spectral images (ASIs). As we studied our images of the 1870 Field Diary manuscript, we soon recognized our need to highlight particular events in the life of the diary in a manner more dynamic than that possible through reference to static spectral images. This need led to the introduction of ASIs (in GIF format) as a tool for advanced manuscript study. This essay provides a brief introduction to these images and to this aspect of the project development.

The work of imaging scientist Keith Knox, in the main phase of image processing (2014-16), led to our initial research into using ASIs. This research followed two trajectories.

First, Knox developed a series of ASIs (color_raking) that explore the relationship between text and topography by peering beneath the surface of the writing on the page. These ASIs allow viewers to see features of the page that are not always visible in natural light. Generated using a custom script, each animation plays in an infinite loop, alternating between two images of each page: first, a natural light image shown in decreasing 10% increments of opacity and second, the corresponding spectral image, which has been processed to show the texture of each page.

Second, Knox also created sets of PowerPoint and PDF presentations that enable users to compare stain and smear alignment between two sides of a single leaf (overlaid) and that facilitate reivew of natural light and topographical images side-by-side (flipbook). He then transformed the latter into looping animations and, separately, also created new animations that move through longer sequences of pages, thereby foregrounding the progression of material processes across those pages (various).

Collectively, this work demonstrated the overall value of ASIs. Unfortunately, developing further ASIs did not fall within scope of our original NEH grant and, moreover, other processing needs also prevented further attention to ASIs during the main phase of image processing work.

Once that main phase ended, research assistant Ashanka Kumari, in collaboration with project director Adrian S. Wisnicki, determined to prototype an alternate technique for creating ASIs that would advance study of diverse material aspects of the manuscript and combine multiple spectral images in order to offer users a representation of material manuscript processes, such as liquid saturation or page discoloration, as they develop over time.

The spectral images produced for the multispectral edition of Livingstone’s 1870 Field Diary illuminate a range of the manuscript’s material characteristics. These include elements of composition, manuscript handling, and environmental impact as follows:

Once we had identified and studied these elements, we determined to create a range of representative ASIs, each focusing on one specific material characteristic. We wanted to foreground this characteristic in a manner that would be legible to users, efficiently combine static images into a dynamic visualization, and could be easily reproduced by our project team as well as others outside the scope of our project. Above all, we wanted to bring the material history of the diary to life in an exciting manner that demonstrated the individual and combined value of our new processed spectral images. 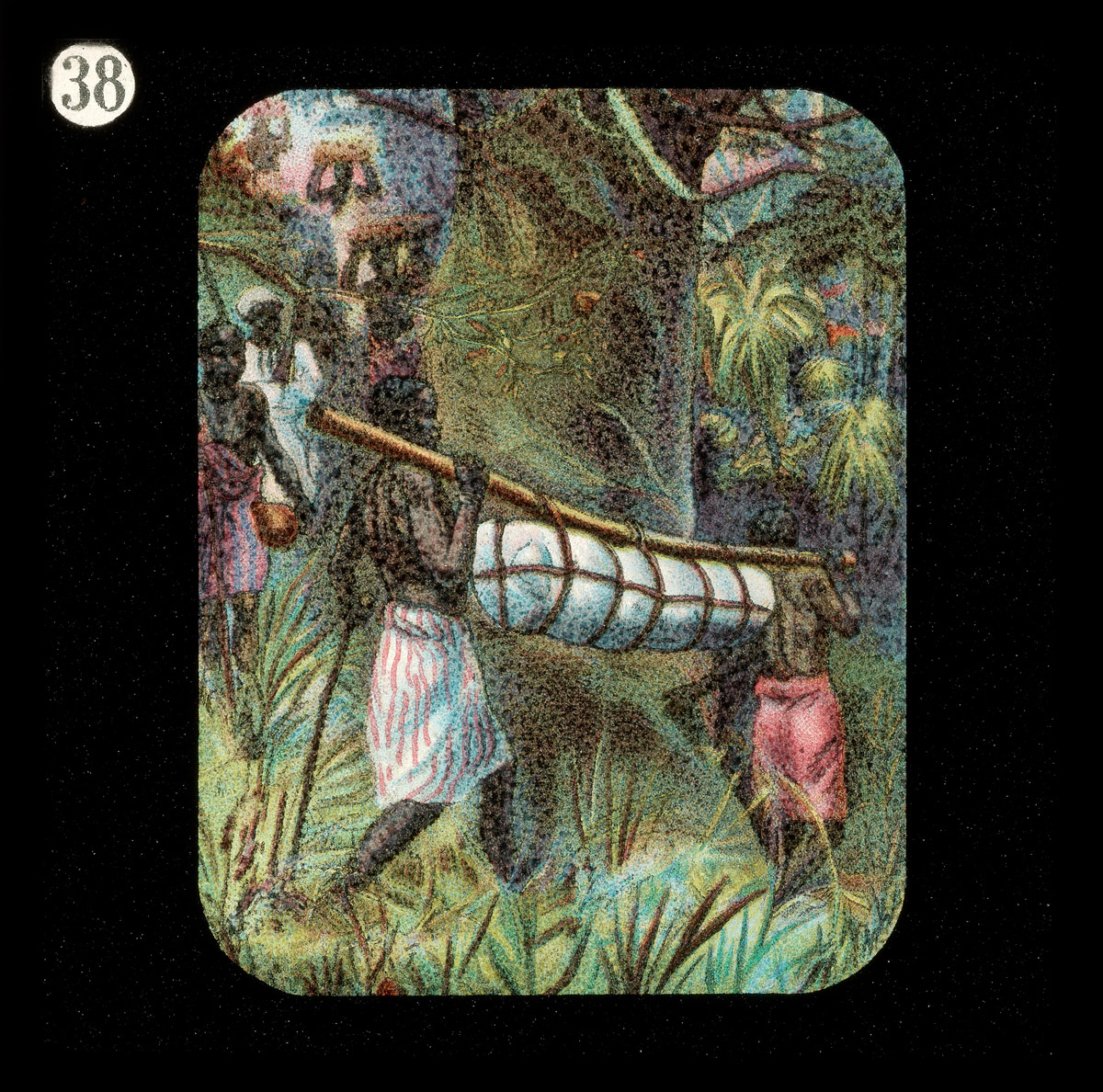 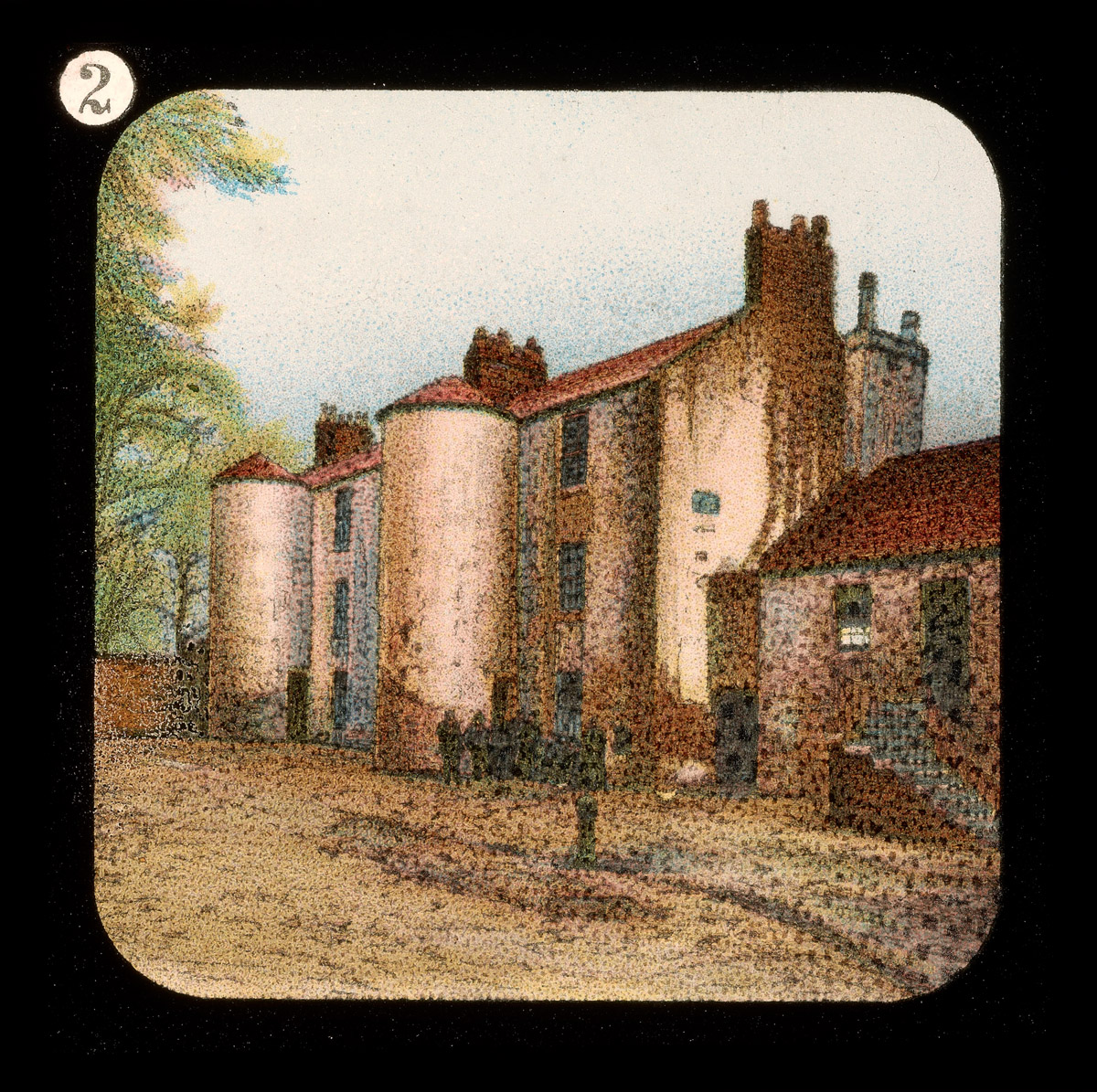 Images in the Graphic Interchange Format (GIF), the format selected for our ASIs, are ubiquitous on the internet. The format has proven easy to create and share, is supported on different browsers, and plays on an infinite loop, thereby removing the need for users to iterate the animation. GIFs also have time as a vector, a feature that supports our goals of showing the evolution of the manuscript over time. Yet despite such advantages, GIFs are not ideal for high-resolution images such as ours and indeed GIFs best lend themselves to video clips rather than static photographs.

As a result, the initial stage of ASI development focused on identifying the software appropriate to the project needs. Kumari’s first attempts to create ASIs using online generators resulted in choppy GIFs that lacked smooth transitions between individual spectral images. As a result, she ultimately settled on iMovie, a free Mac-based tool that allows for the addition of transitions between images and modifications in timing, and can also generate numerous files, which better supports the batch processing needs of our project. 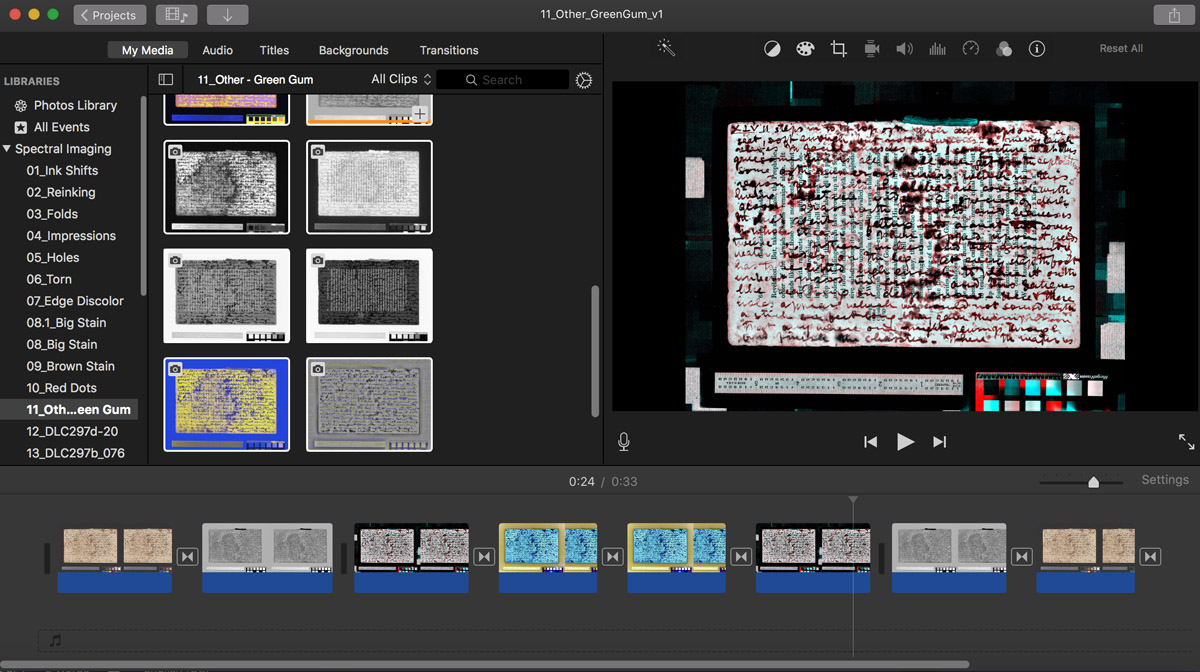 With the software selected, Kumari, in consultation with Wisnicki, developed the following workflow for creating the ASIs:

Overall, this workflow enables us to exert considerable control over the final product and to experiment with different image and speed permutations. The biggest disadvantages of the process are, first, the need to convert MP4s to GIF and, second, the amount of time needed to export the MP4s, especially when we include images with larger file sizes.

Knox laid the groundwork for our development of ASIs by creating animations that linked text and topography of individual manuscript pages (forthcoming in January 2017) and by producing PowerPoint and PDF presentations that allowed for comparative study of features such as staining, smearing, and page surface:

Knox also developed animations based on the presentations and, separately, created new animations that targeted material processes in relation to longer sequences of pages:

Kumari successfully developed a repeatable technique for prototyping ASIs and produced a series of such images, each of which enhanced one or more manuscript features of interest as follows:

Kumari also created additional sets of ASIs that focus on two specific pages of the manuscript, each of which combine a range of features of interest, including layered text and staining:

Bonus: Download all the ASIs of Livingstone's 1870 Field Diary developed by Kumari in a single ZIP file (685.9 MB).

The presentations and initial animations set the stage for creating the ASIs, which, in turn, are able to foreground manuscript feature(s) of interest while relying on only a handful of original static images. The ASIs also demonstrate the importance of the original spectral images – both individually and in combination – in highlighting the given feature. Finally, because of duration, the ASIs help underscore the role of change over time in producing the given feature.

As a result, the presentations, animations, and ASIs together realized and even exceeded all objectives for this aspect of project development. Additionally, the process for producing the ASIs developed by Kumari is straightforward and, although potentially time consuming, can be replicated in the future to illuminate additional features of the 1870 Field Diary manuscript, as well as other manuscripts enhanced with spectral imaging.